The Magical City of Paris for the Holidays!

We will be in Colorado this year for the first time, for the holidays! It leads me to dream about spending the holidays in other magical places! And what more magical city than Paris!? 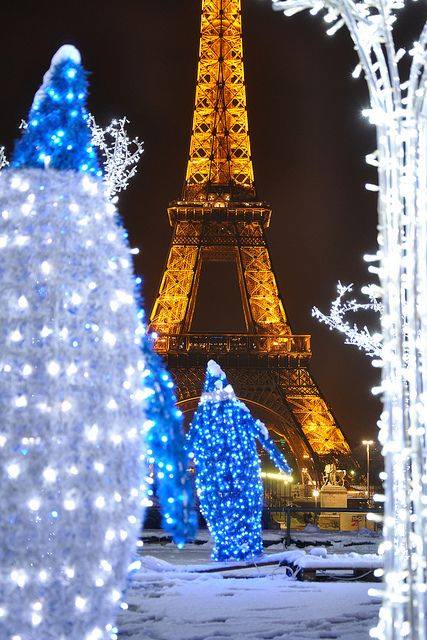 Paris undergoes a transformation with the approach of the festive season and I thought it would be nice to see how the “City of Lights” does the season!

There are many festive markets in Paris, but not to be missed is the market along the Champs-Elysées (shahn-zay-lee-ZAY) close to the Eiffel Tower with over 200 wooden chalets offering a variety of crafts and culinary specialties, and over 400 beautifully lit Christmas trees. 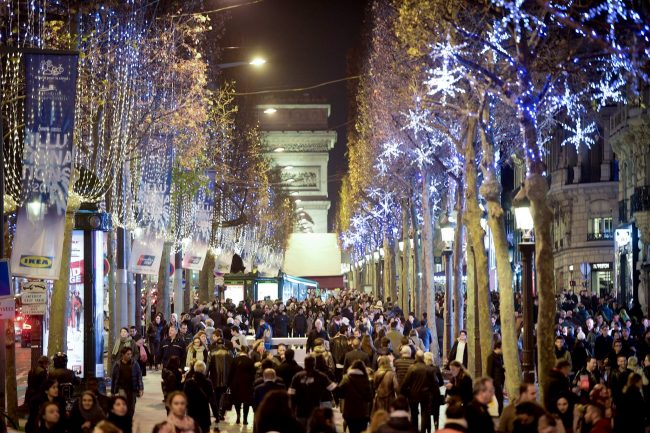 And known in France as “La Plus Belle Avenue du Monde” (the most beautiful avenue in the world). Check out more fun things to do on the avenue here…the fondue sandwich sounds good!!

The exquisite Sainte Chapelle (holy chapel) in Paris is a Gothic gem. The four musicians of Quatuor Les Solistes Français offer a program featuring favorite compositions, including works by Mozart and Schubert. Built in an impressive six years, the Sainte Chapelle was intended to house precious Christian relics, including Christ’s crown of thorns, acquired by Saint Louis. If you have a few minutes, here is a mini lesson by Rick Steves. Breathtaking! 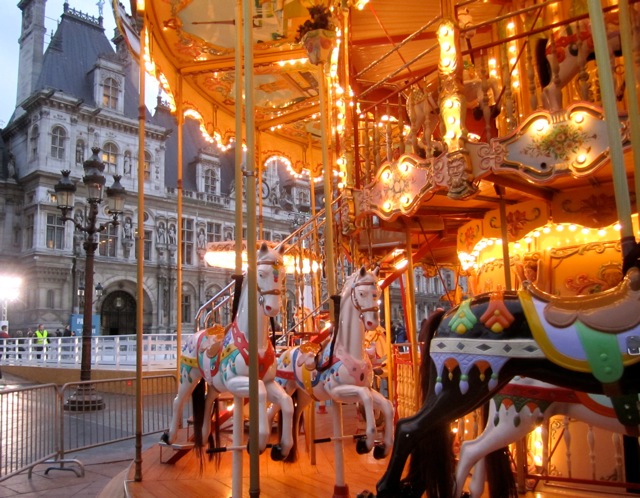 The French call their merry-go-rounds carousels and you’ll find about twenty of them scattered all over the city. The first carousels appeared in France in the second half of the 19th century and soon became highly popular with the Parisians. At Hôtel de Ville, you will find one the best carousels in town. 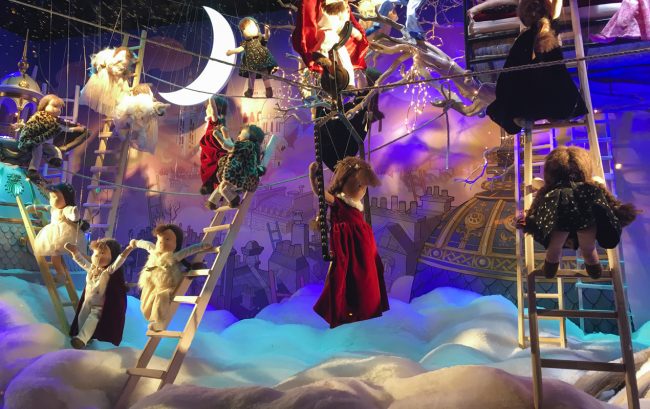 Every year, the historic department stores of Paris reveal their highly anticipated holiday window displays with sparkling lights, a magical soundtrack and moving characters. The theme at Printemps (pran-tahn) was inspired by the dreams of two fictional children, Jules and Violette, as they slumber on the night before Christmas. In their dreams, they find themselves inside the store after closing time, among a cast of fantastical characters. This is one of the best parts of enjoying  the holidays in Paris!!

The windows of Galeries Lafayette Haussmann are unbelievable. This year they are all made of paper — a frozen world made of paper! It took a year to build and was inspired by the designer, Lorenzo Papace, in collaboration with Arjo Wiggins papier. He dreamed up a frozen world where a lost family of Polar bears traveled through a magical frozen paper world. They have fun, dance, and play on all floors of the department store before returning to the North Pole. 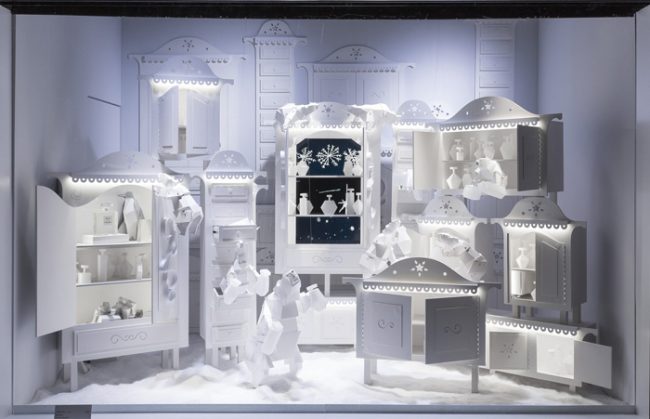 I could do an entire post on these windows! See more of this extraordinary project here! 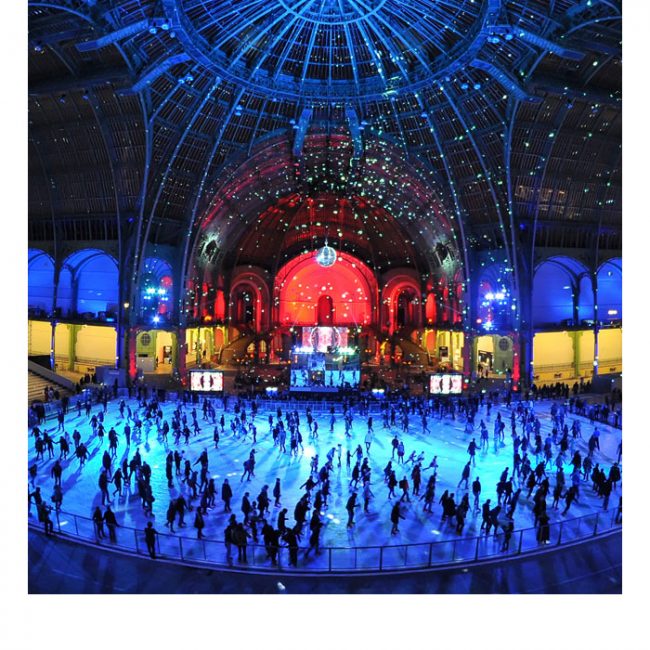 You can also ice skate under the Grand Palais glass roof, one of Paris’s beautiful monuments. At night, the world’s largest indoor ice-rink will turn into a giant dance floor: disco balls, light shows and DJ’s will transform the atmosphere! 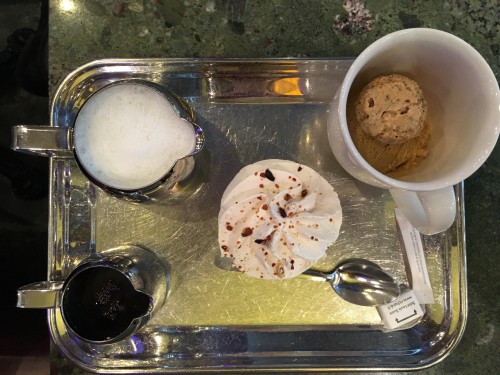 And, of course, you will find the best pastries in the world here. But, how about this for ending a magical day in Paris…the chocolate affogato tray at Berthillon. Presented on a silver platter, you receive a scoop of ice cream or sorbet of your choice (try salted caramel or classic vanilla!) a pitcher each of melted dark chocolate and frothy hot milk, and a bowl of whipped cream. Then mix it yourself for a cup that is as chocolate-y or creamy as you like. If that’s not enough, it’s garnished with a delicious cookie. Oui Oui!!!! 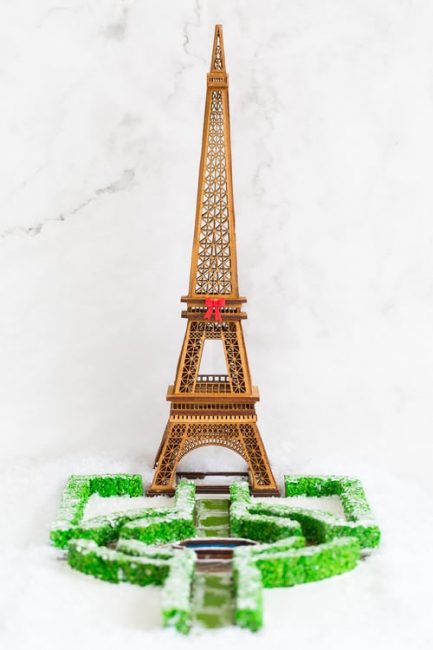 If you can’t make it this year, my sweet friend and very talented baker Monica Eskridge, of Paper Flour Ink could design and build a beautiful Eiffel Tower out of gingerbread! 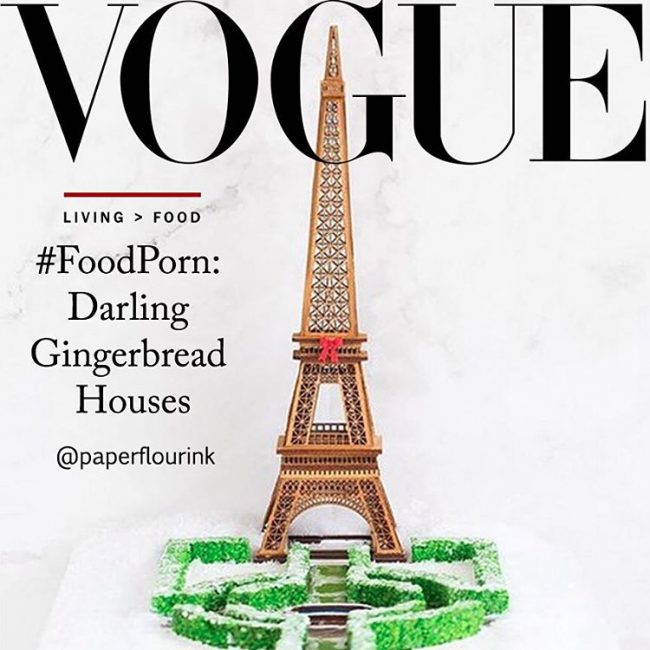 It was on display at the French Consulate’s residence and Vogue picked it up online. Congrats, Monica!! 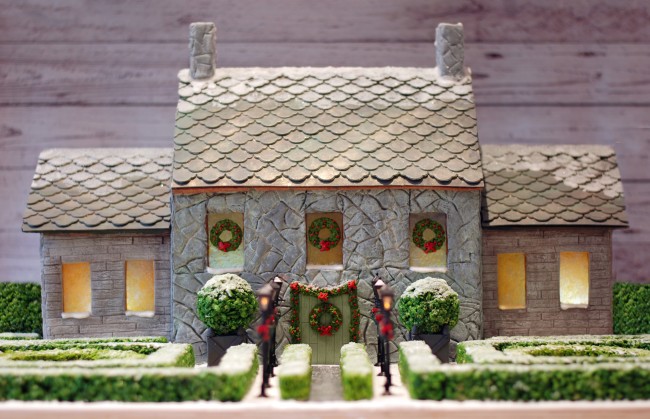 Typically, she rolls out the gingerbread and cuts it into shapes, as she did on last years masterpiece, but, this year she made large sheets of the yummy cookie and then used a laser-cutting tool to make her shapes. The precision is amazing! 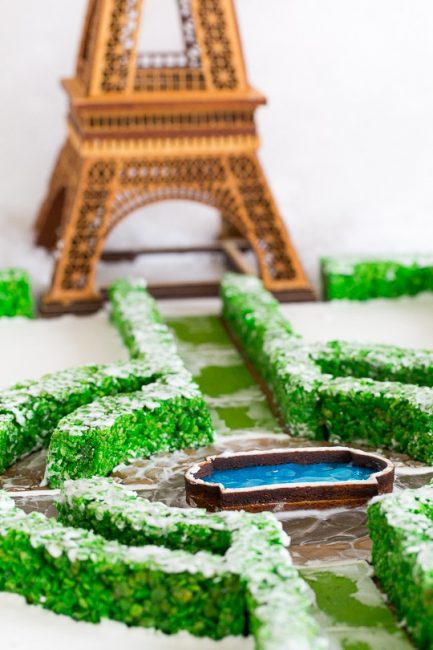 I could try and explain but it might be best to show you!! Below is a video of how she create these works of art! Keep up the awesome work, Monica! See another fabulous gingerbread project by Monica here!

Right here in Houston, we have some amazing French finds. Try one (or all) of these top rated pastry shops! Houston has no shortage of exquisite French restaurants! And if you’re looking for fine French antiques, Joyce Horn, MAI, and Back Row Home will surely have some unique finds.

Joyeux Noël ! Have a beautiful holiday, wherever you are this year! Until next week…