The color yellow, one of the original pigments praised for its relation to the sun. Whether bright and cheery or rich and warm, using yellow in the home can impacts us from our brain function to our moods and everything in between! 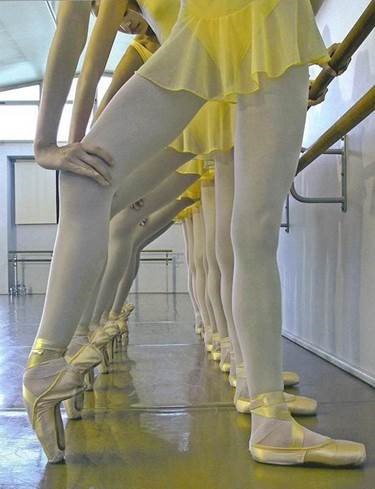 Whether you are left or right brained, yellow appeals to both our logical and creative sides! The lightest color on the wheel inspires original thought, heightens mental agility, and stimulates inquisitiveness. 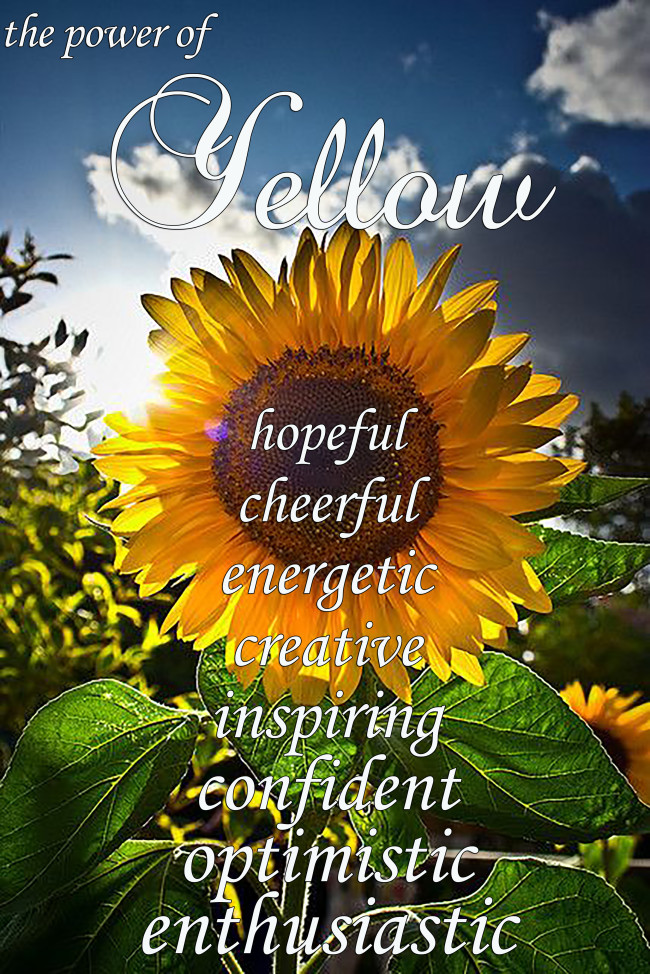 Yellow has also proven to be a hue that has an uplifting effect on ones mood by triggering feelings of happiness and excitement and arouses hope.

In design, yellow is as versatile as it is beautiful. Often considered a joyful color, studies have shown that adults and babies become upset and angry more often when inside yellow rooms, leading some scientists to believe that over exposure to the color could result in irritability and frustration. This could explain why pops of bold yellow are often used in small doses as an accent color! 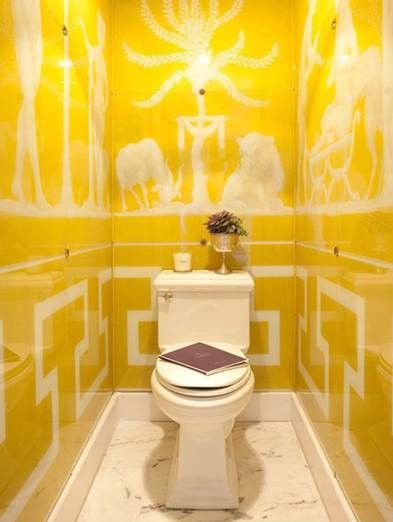 Yellow helps with decisiveness and clarity, but it can also be impulsive. Designer Raymond Goins brings his trademark sense of bold style and devotion to the classical arts together to create a toilette unlike any other. The yellow and white mural reads like an over scaled ancient Greek fresco created using a technique known as Verre Eglomise, or reverse painting on glass. So beautiful, I have an entire Pinterest board dedicated to the art here! 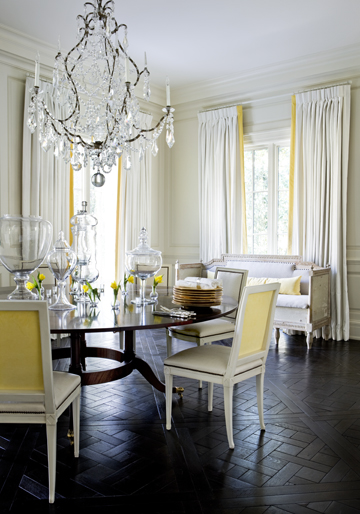 Alternatively, applying yellow with a light handed- touch can result in a room both cheerful and soothing. Featured on the cover of Veranda Magazine (2010), Designer Melanie Turner created a dining room bursting with understated cheer. Painting the insets of the chair backs and placing touches of yellow on the window drapes and accent pillow, the classical room is featuring beautiful cream paneled walls and dark parquet flooring, affords the room a light and airy feel. 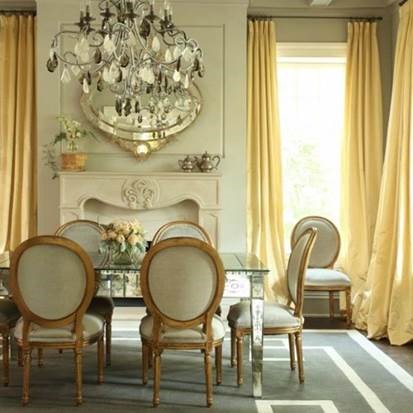 When paired with light wood tones, the color affords a space a buttery hue reminiscent of Earth and sunshine. I love this dining room designed by The Iron Gate; kept predominantly neutral, the soft yellow silk drapes brighten the sunlight filtering through the large windows and combines beautifully with my beloved gray!!! 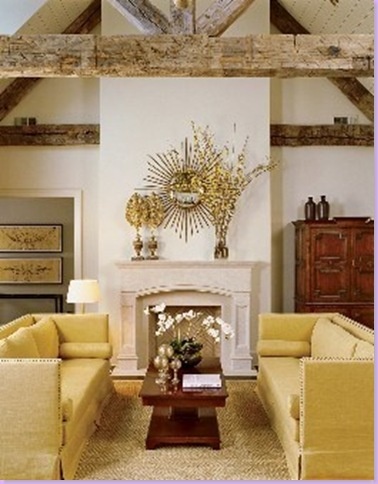 In the meaning of colors, yellow inspires original thought and inquisitiveness, perfect for use in entertaining spaces meant for conversation. Suzanne Kasler uses the earthier tones on the yellow spectrum of varying intensity and touches of gold which lends this space a warm effect, amidst rustic features such as the rough-hewn beams. 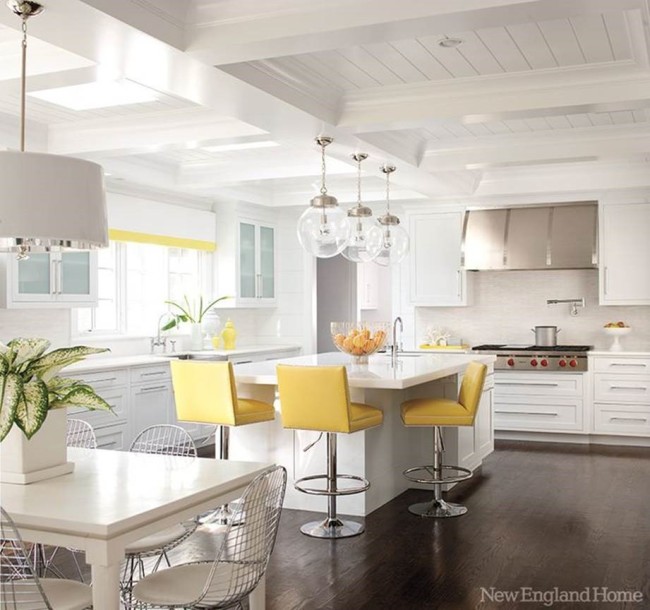 Yellow helps us focus, study and remember information. I think these yellow bar stools, in this kitchen designed by Morgan Harrison Home, would be the perfect place for the kiddos to perch when studying for a final exam! 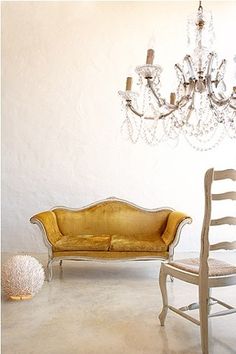 Yellow is the most visible of all colors which is why it is used for pedestrian crossings. This gold-toned velvet setae certainly stands out in this Parisian chic room. 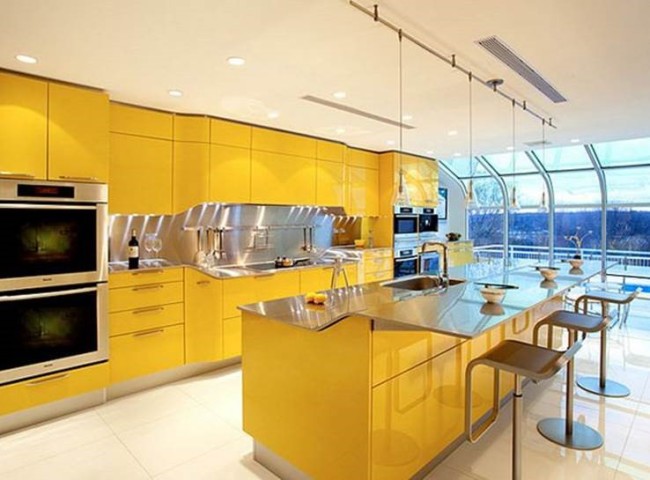 Restaurants have long capitalized on the fact that yellow is the most visible color on the spectrum – hello golden arches! Attention grabbing aside, yellow has been noted to increase metabolism as well as make people eat faster than normal; making it the ideal color for fast food restaurants who thrive on quick turnover! 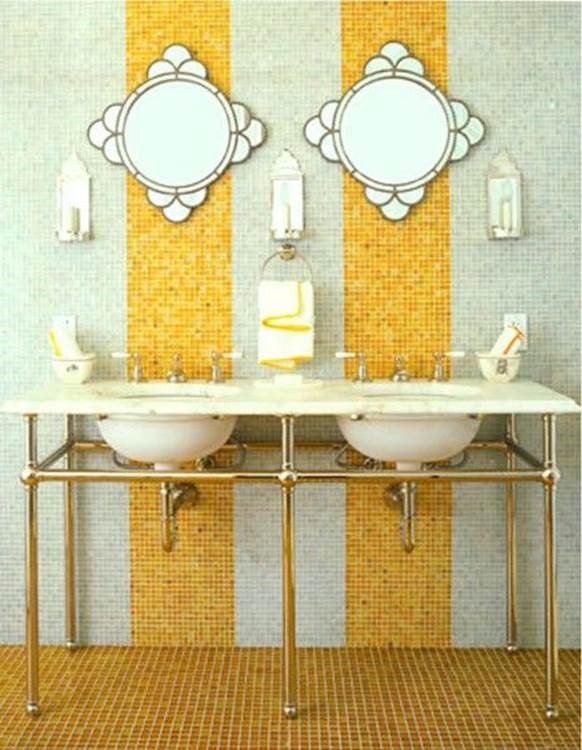 Yellow in the bathroom can be just the wake up call you need to get going in the morning as it relates to the head and not the heart, jump starting ideas and critical thinking. This vintage inspired bath features glass tiles from Waterworks with yellow stripes adding visual interest to the sink area. Designer Jay Jeffers used art deco mirrors from Pottery Barn for a final whimsical touch!

Adjusting the intensity of yellow makes it the ideal addition to any palette. As seen above, paired with sky blue and a dash of leafy green, this scheme work beautifully together. A great rule of thumb when decorating with yellow, the closer the colors are in wavelength, or low- contrast, the more soothing the effect. 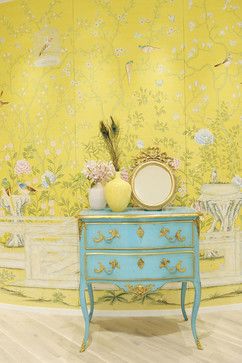 Soothing and cheerful in feel, these gentler yellows are a sunny and energizing option when decorating a space meant to stimulate the imagination. When paired with other hues like robin’s egg blue, the effect is baby soft and inviting.

In contrast, the further apart in wavelength the color combination is, as seen above with yellow and purple, the more intense the effect! 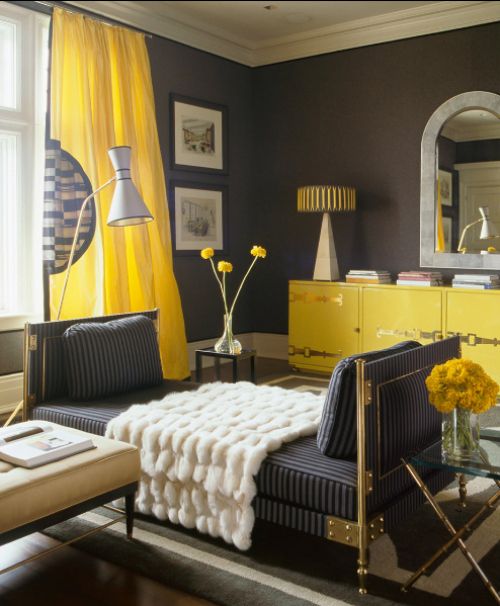 This is displayed in the above bold and powerful room. When placed amidst cool dark gray tones, these opposites on the color wheel only emphasize the other! 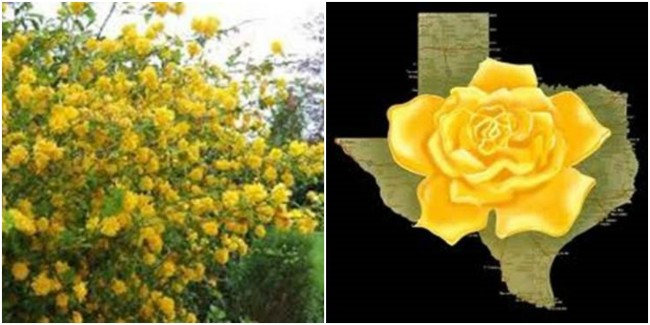 In Texas, the yellow rose takes on a whole new meaning! The Yellow Rose of Texas is a folk song dating back to the 1836, following the Battle of Jacinto. Legend has it, a beautiful ‘high yellow (a term often used to describe people of mixed race) woman named Emily Morgan was captured by Mexican President, General Antonio Lopez de Santa Anna. Emily successfully seduced and distracted the General, affording General Sam Houston the opportunity to seize and conquer his opponent while their guard was lowered; winning the battle in mere minutes! 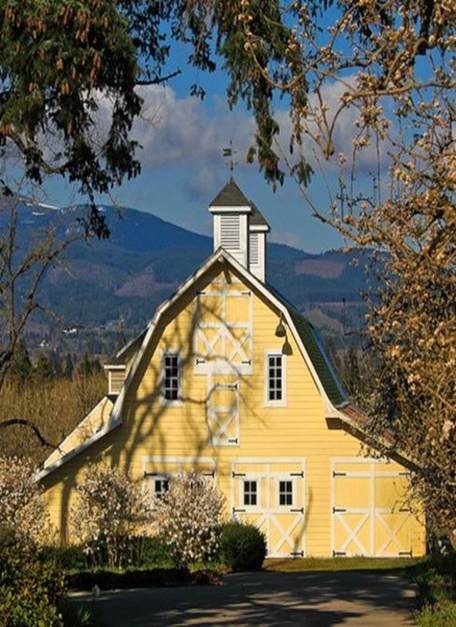 I hope you enjoyed my exploration of a color whose history is as old as our own. To see more of this vibrant color, visit my Pinterest board here! Wishing you sunshine days and mellow yellow evenings!

Segreto Style is traveling to Jackson Mississippi! I’m heading to Jackson, Mississippi!! Hosted by the incredible Antique Shops of Jackson, join me on April 23rd as I discuss how you can develop your own design style and the trans-formative effect decorative finishes can have on a space! Spread the word!!!  I hope to meet many of you there!!! 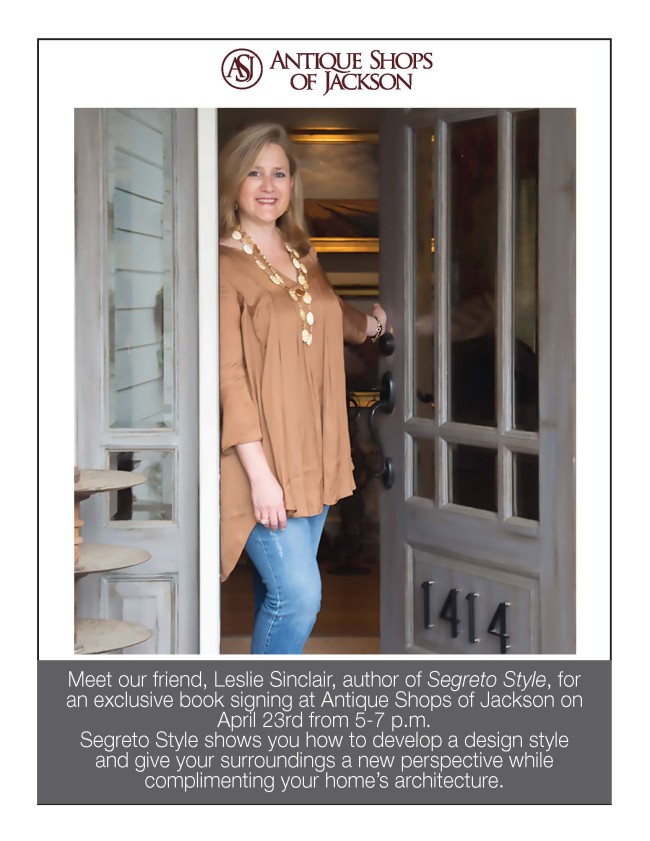