Today I am going to show you the final reveal of my kitchen after months of Pinterest pinning and sweet Goodchild Builders implementing all of my ideas! Hang on Friends, this is a long one!!! 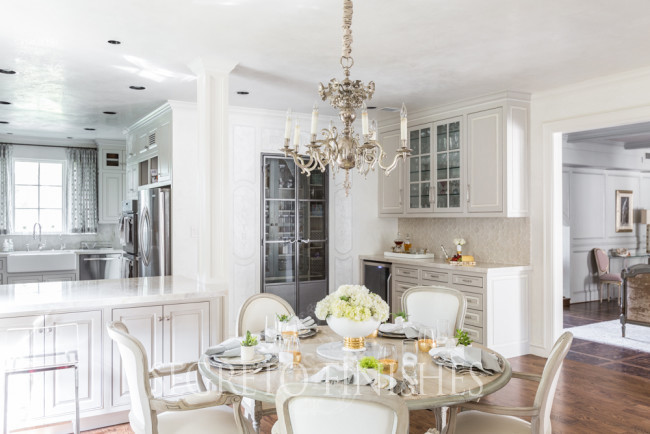 Last week I showed the before’s.  Here is the final reveal! Daughter Kirby likes the changes as much as I do.  So light and bright, this space incorporates organized areas and much more counter space! 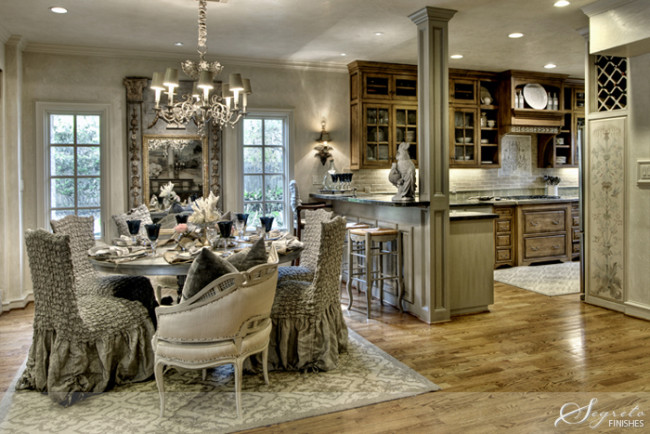 The previous design had a bar top connected between the post and the window wall, limiting the kitchen work area. 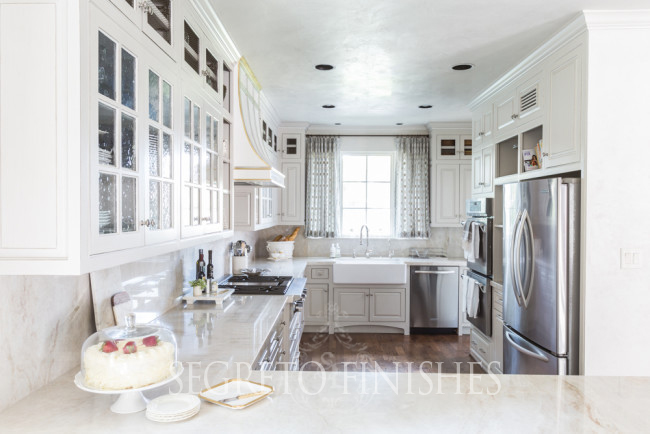 Dropping the counter in the new design(an idea that friend and designer Sarah Eilers contributed) and extending it to the window casement, provided much more counter space for prep work and for buffet style eating, much like an island would.  With grown daughters either living with us or visiting, we are now able to enjoy cooking together more comfortably! The walls and ceilings were plastered to blend with BM Sea Pearl. I love the reflection plaster lends to a space!!

This idea also allowed the room to build the cabinets out on the breakfast room side giving ample silver storage. The far side incorporates drawers which use up that corner hard to reach space on the kitchen side.  The next two sets of doors house shallow shelves for serving pieces.  I had space here for two Lucite and chrome counter height bar chairs from CB2, affordable and modern!! 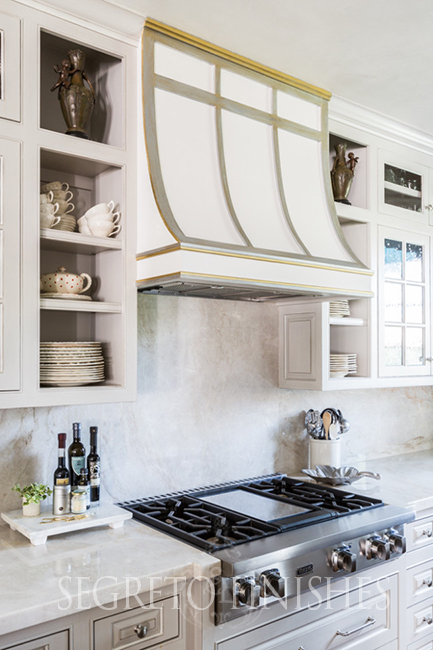 Rather than tile I ran the quartzite from Walker Zanger up the wall keeping the kitchen clean in feel!  Under my new Viking range from Acero Bella, is a drawer front which reads like two divided drawers. Painting the hood to combine shiny white, brass, and nickle, I was able to create  an enamel and metal feel from wood at a fraction of what the real deal would have cost. 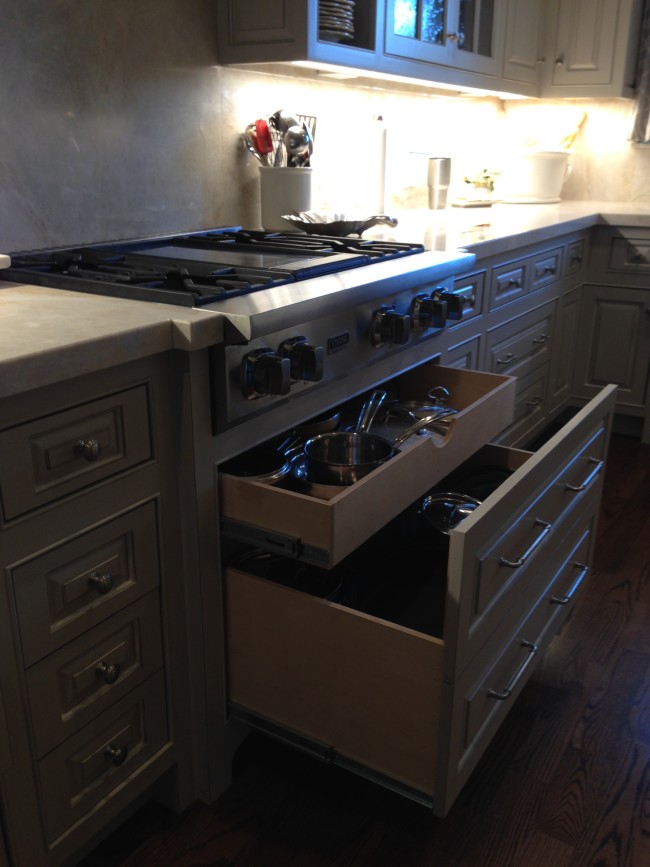 A shallow and deep drawer is incorporated into the design. This allows me to see and find my pans and lids so much quicker!!! 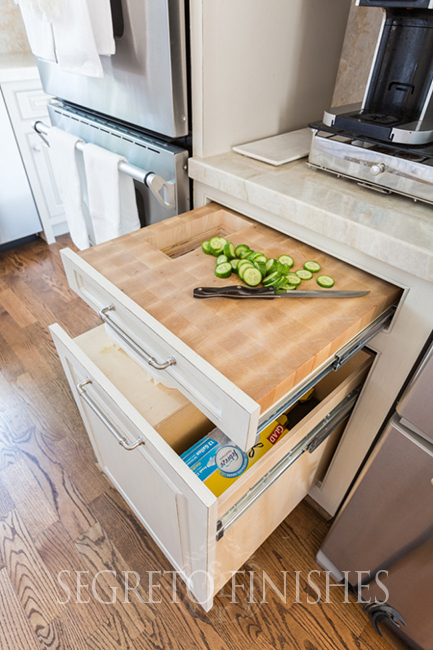 OMG, sometimes its the little things that you get the most excited about!! Converting a storage cabinet to a trash can (with room for the bags) and chopping block above, created an extra work space and makes it so easy to slide the unwanted mess right into he trash!!! I ordered the butcher block in the right size on line for $139.  Goodchild builders cut the whole and attached it to the drawer! Above is a coffee bar station and microwave! This little 2 ft space is now a whole new workstation!!! 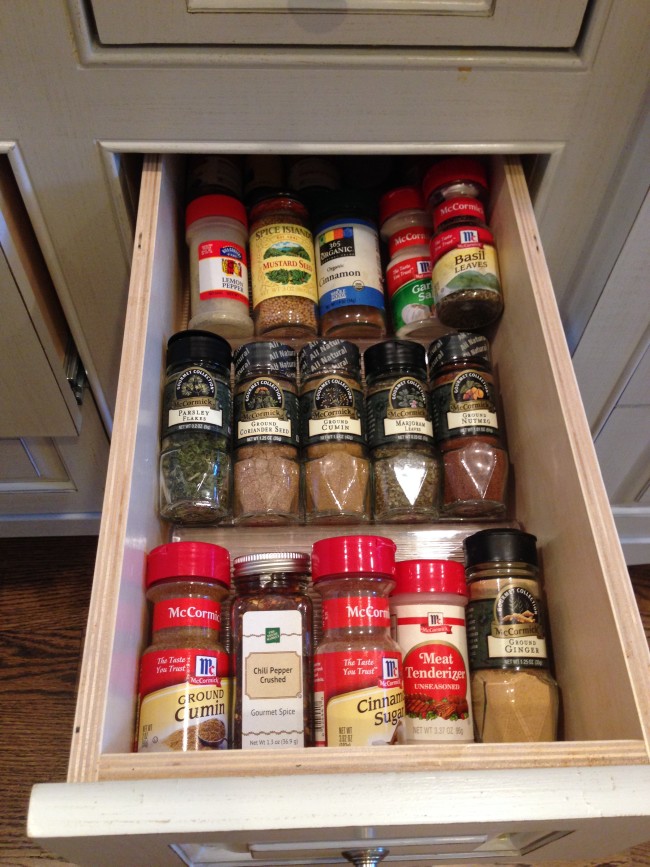 Rather than those long pullouts on wither side of the stove I am finding it much more functional to house them in drawers. Using two drawers, Hilda-my organizational guru, bought acrylic spice racks from the container store!  They work great!!! For more on organizational ideas see Hilda’s tips on my closet organization and pantry redo. 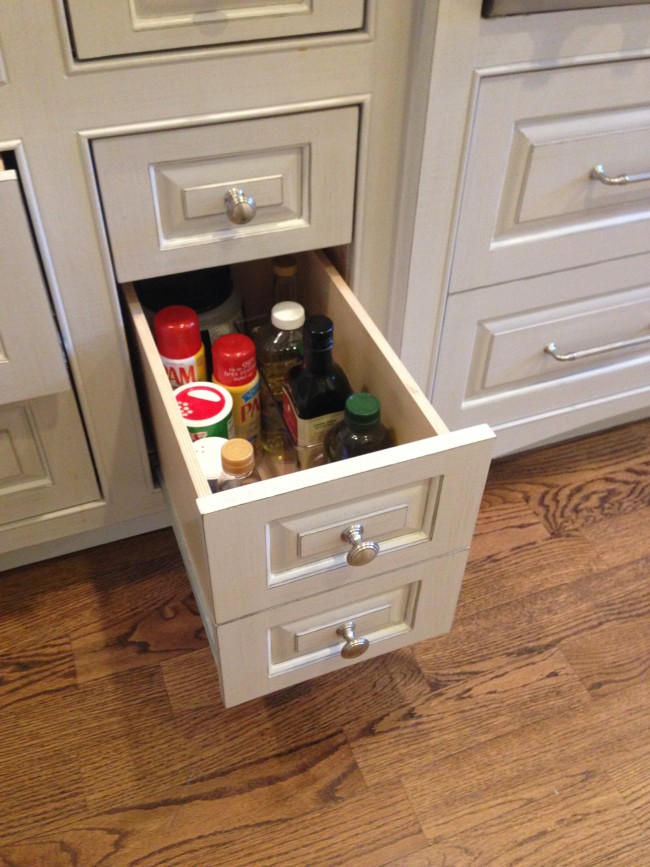 Although the bottom drawer looks like two, it is one deep one for oils, Pam, anything that is a bit taller.  I also bought acrylic containers to place them in, protecting the insides from the oils and making it easier to keep them organized! 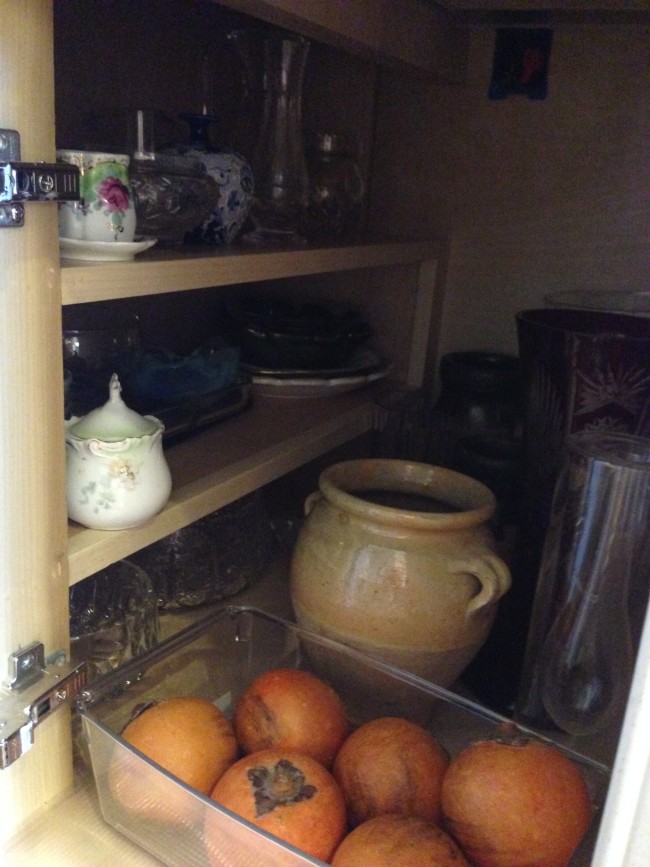 Remember on the other side of the counter where I added extra storage. On the kitchen side two narrow shelves were built, allowing vases, platters and smaller items  to be reached easily.  My taller vases fit perfectly in the open area! 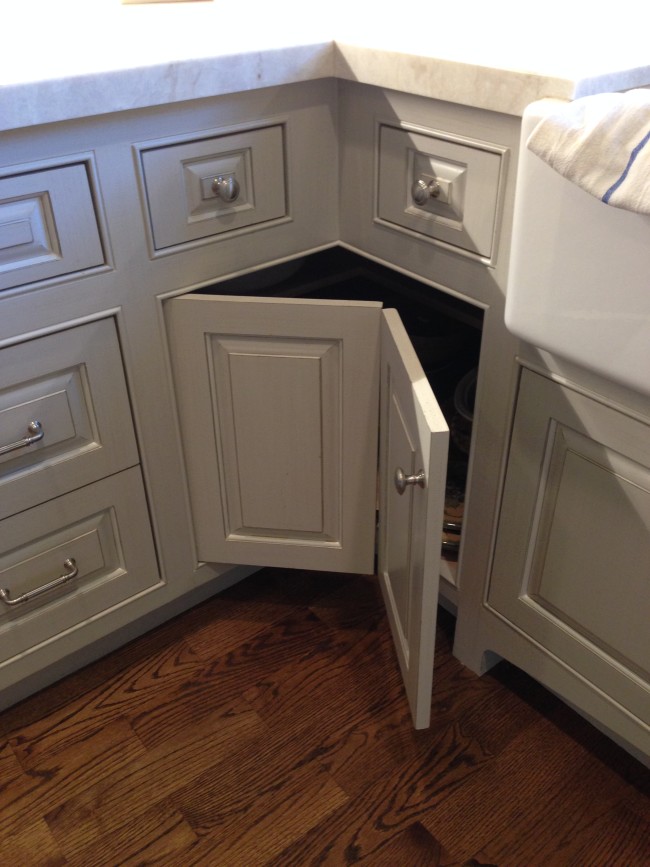 In the opposite corner next to the sink, the doors were built without a center style.  When open, it is easy to see and acess the items within. 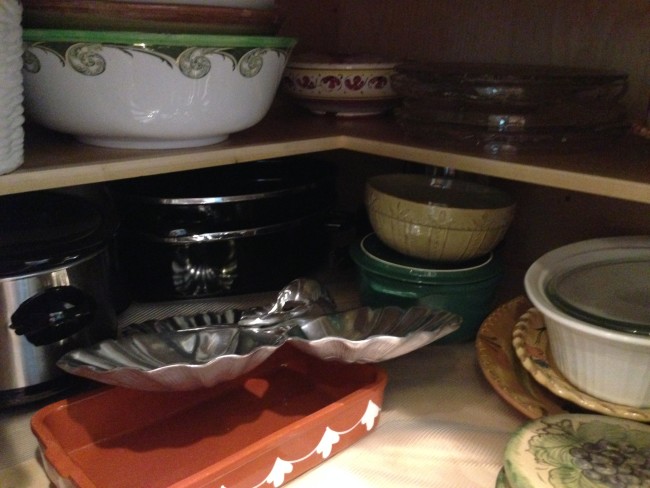 By building a narrower shelf instead of one running the depth of the cabinet, items are easily viewed! 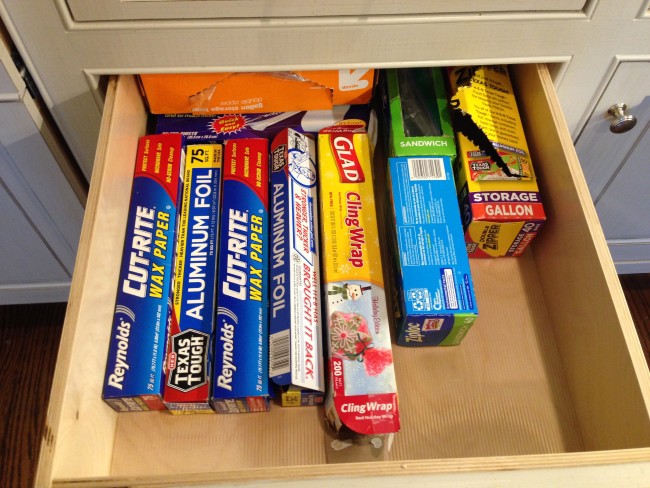 I used many more drawers than doors in this kitchen re-design, giving me so much more accessible storage. 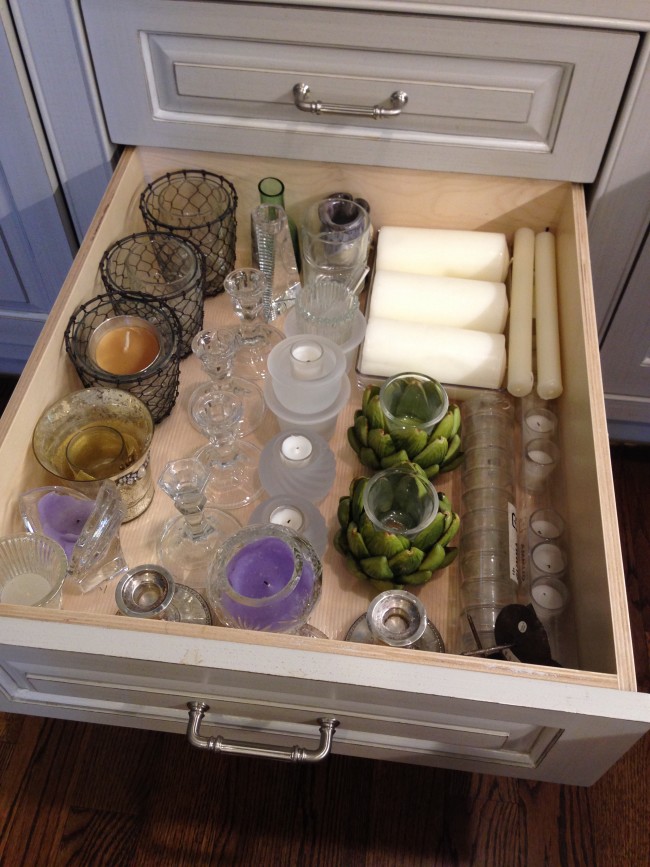 Even my candles and votives have a space!!! 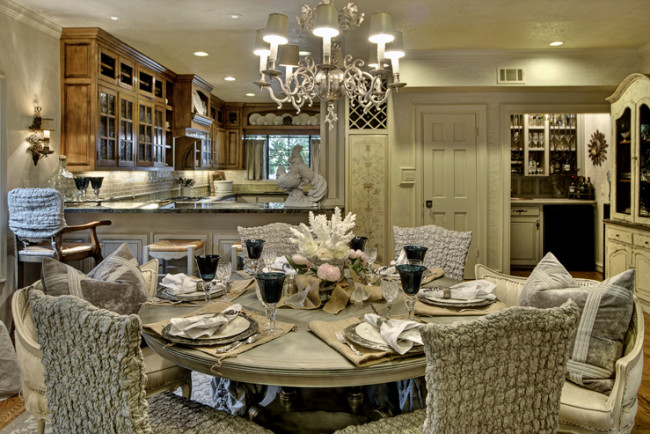 On a previous post I showed you how my pantry bar area had been updated! The pantry was behind the door and bar right next to it!  The furniture piece from Joyce Horn Antiques housed the china, silver and crystal. 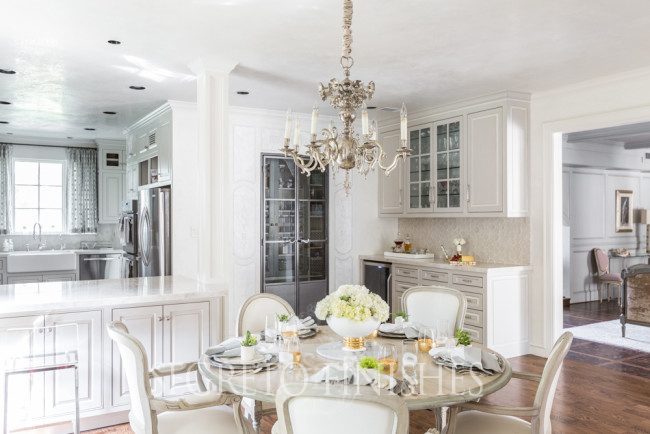 Taking in the bar space, the pantry is now much larger!!  A bar, butlers pantry was build in filling the wall. This configuration, I think both looks better and gives me so much more storage!!! Notice too the new taller window in the kitchen and the farm sink from Acero Bella! What a change!!! 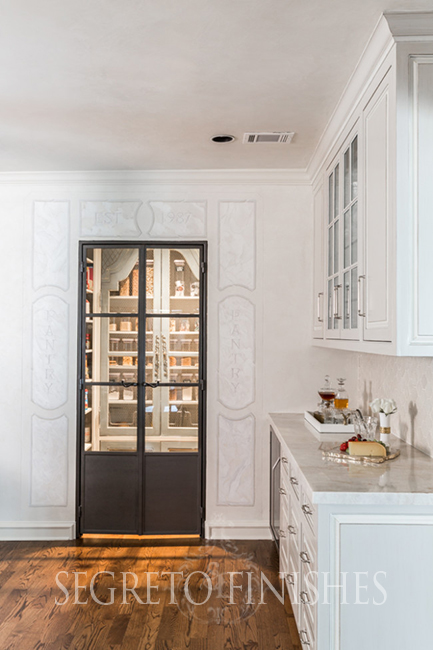 Since the last post on my pantry, I added some decorative painting around the iron doors from ACI Metal Works ! Creating panels, the insets were painted and then Pantry and Est. 1987, the year we moved into the house, were applied to look as if they were chiseled out of marble on the wall! 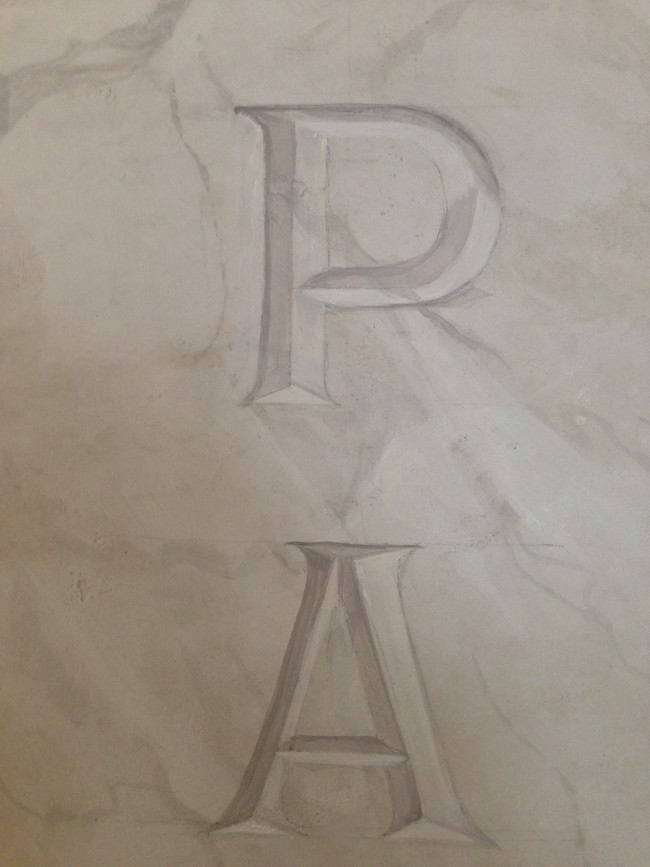 Here is a close up!  Funny Story!  Isai, my plaster manager(the one so great at hanging things) came over with his wife and she said–1987, that’s the year I was born! I thought no way, but she is right, and I am old enough to be their mother!!! 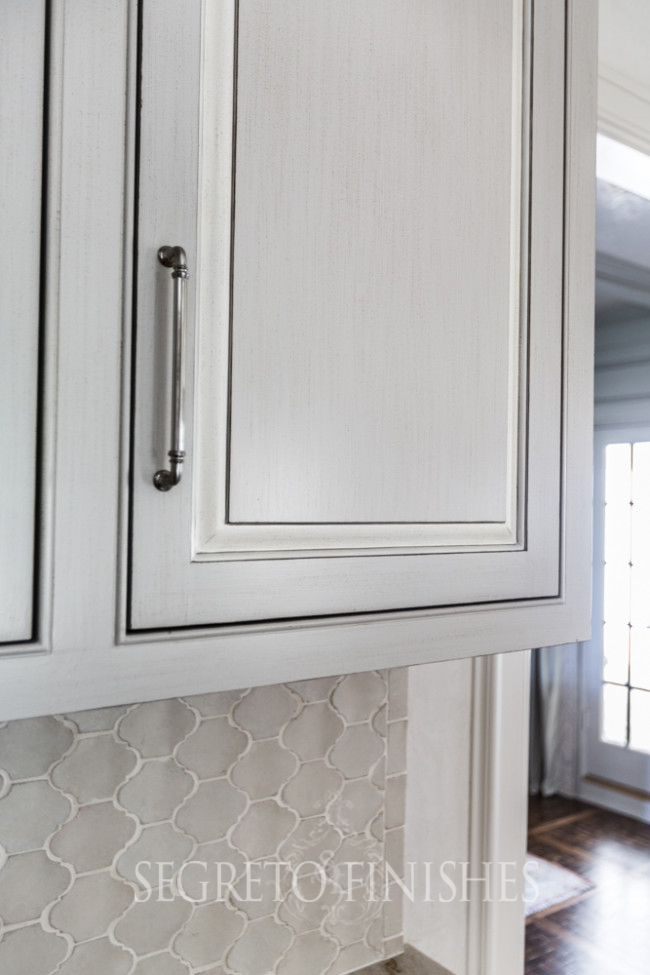 Using  the concrete tile back-splash from Materials Marketing which I had originally purchased for the kitchen sets apart this space!  The cabinets were glazed in a two toned effect, adding white into the reveals, which pulls in the tones from the plastered walls and ceilings.  Acero Bella‘s jewelry like hardware finished off the space!! 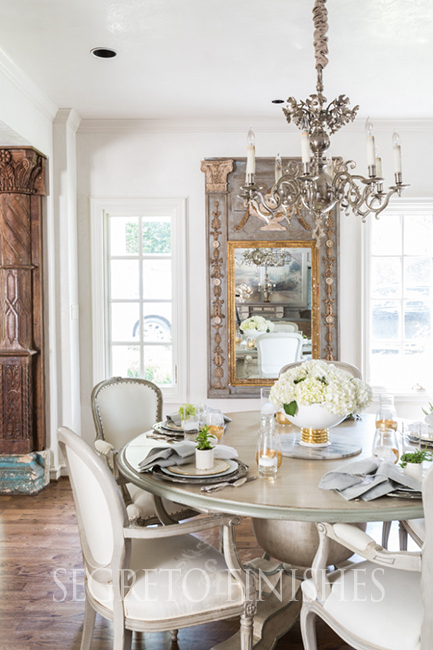 I so hope you enjoyed this update, and that it gives you many inspirational ideas!!  Next post–How to accessorize your bar, butlers and kitchen, along with table setting tips!! I hope that you all have a wonderful week and would love to see you at the launch of my new fabric line at the Houston Design Center’s Fall Market! 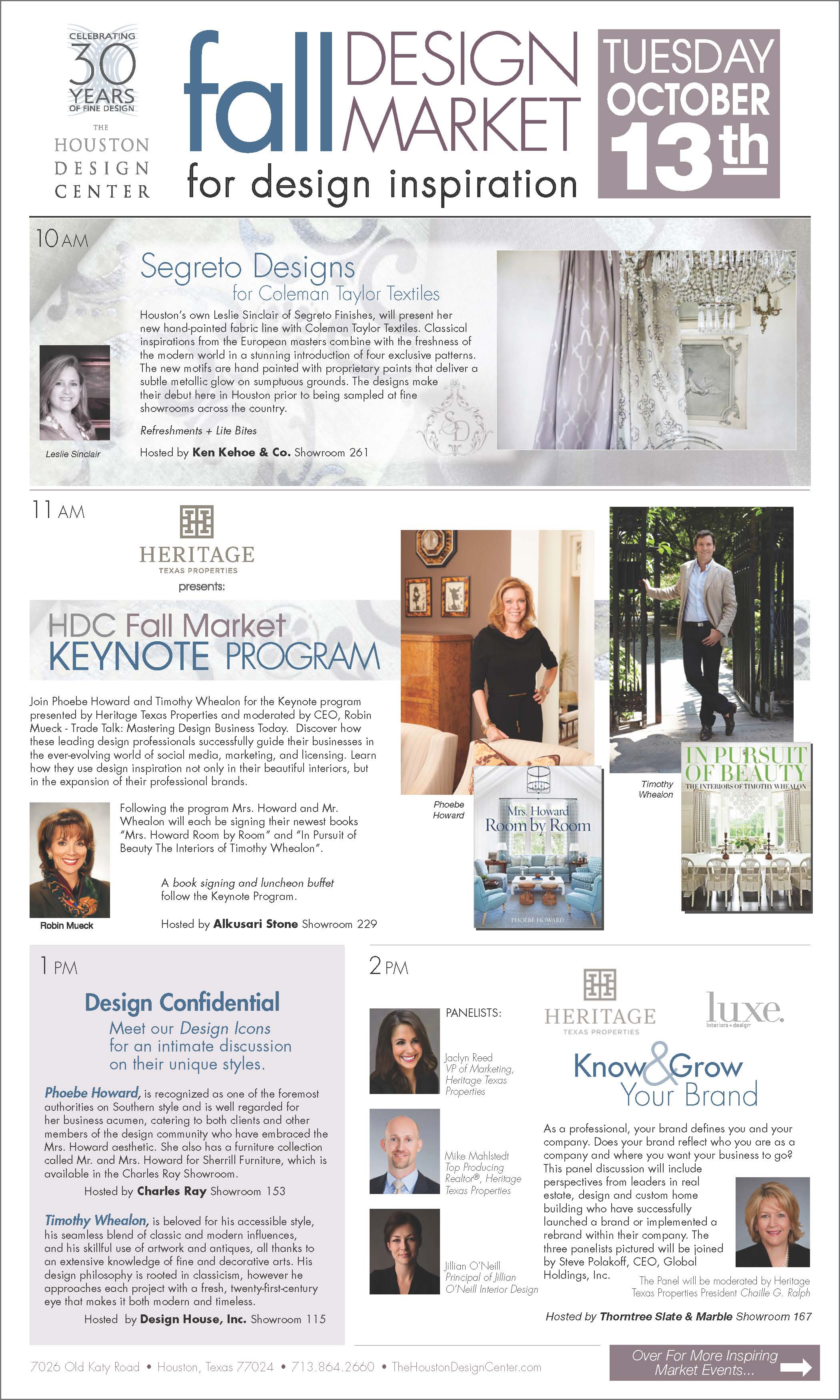 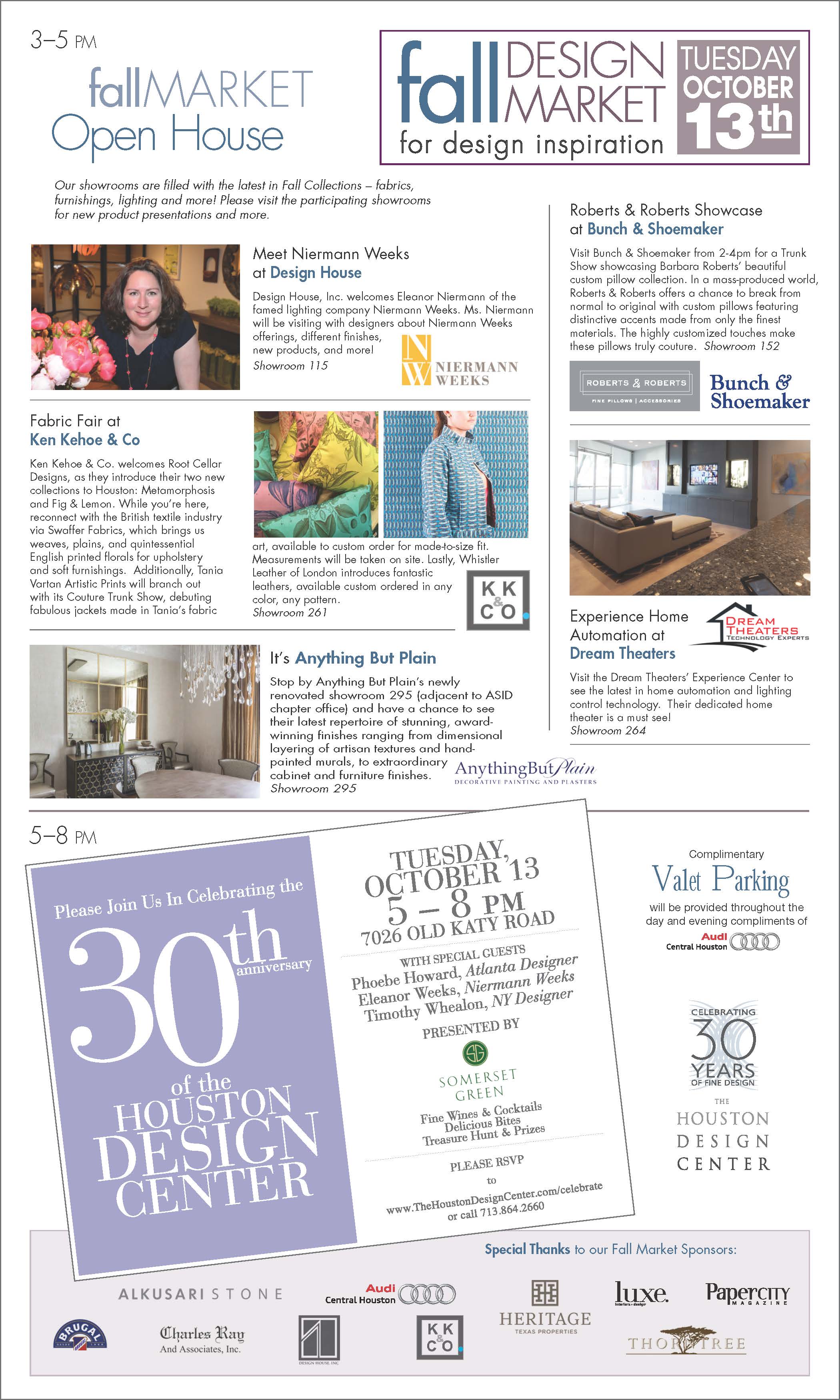