The Power of Finishes- An Amazing Before and After-Interior

Hi friends!! I am excited to show you a home in which finishes both before, with the previous owner and finisher, and after, where Segreto worked with the new owners to make the home their style- really created two quite different looks both inside and out! this week I will show you the inside transformation and next week stay tuned for the exterior!! 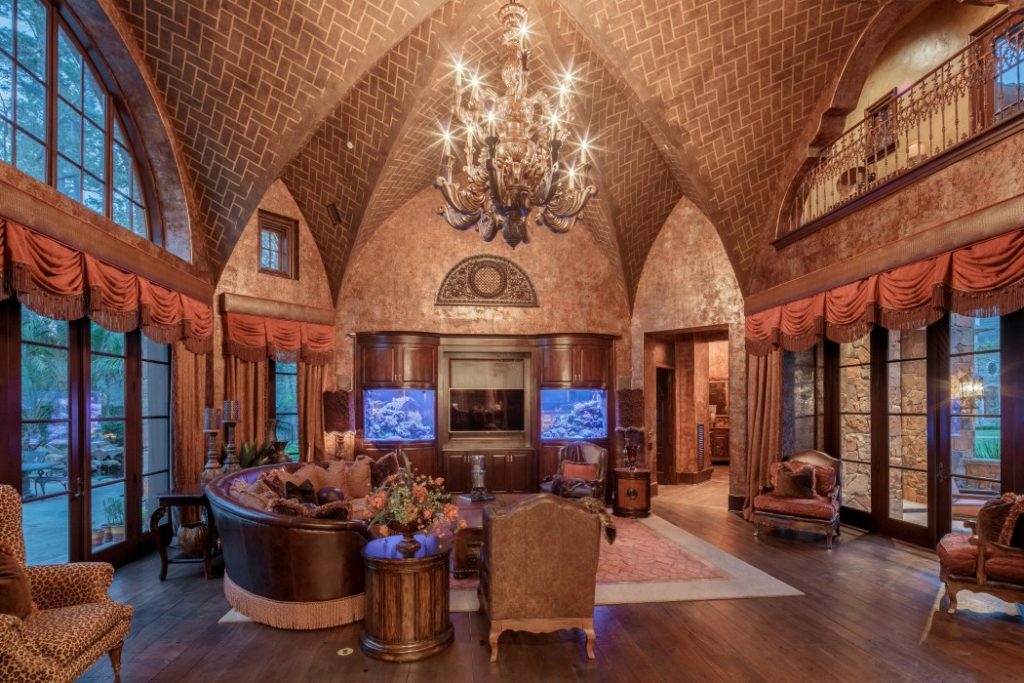 The first owners definitely had a Mediterranean, old world style. The lush fabrics and a darker ambiance which created a home which was formal in feel.  The new owners, more causal in style, loved the homes architecture but preferred a less is more aesthetic an a light bright interior. That’s when Segreto was brought on board. 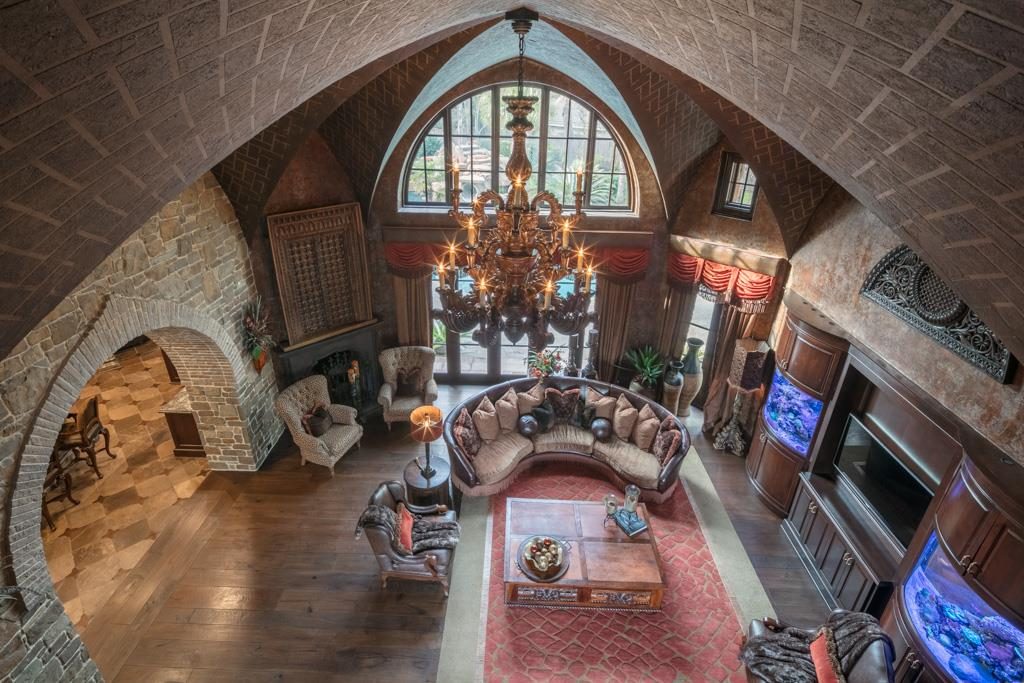 Here is a shot of the same room from the upstairs balcony.  The ceiling was  a a textured Faux brick. For the new change the goal was to simplify the finishes so we plastered over the textured walls and faux brick ceiling lending one backdrop. 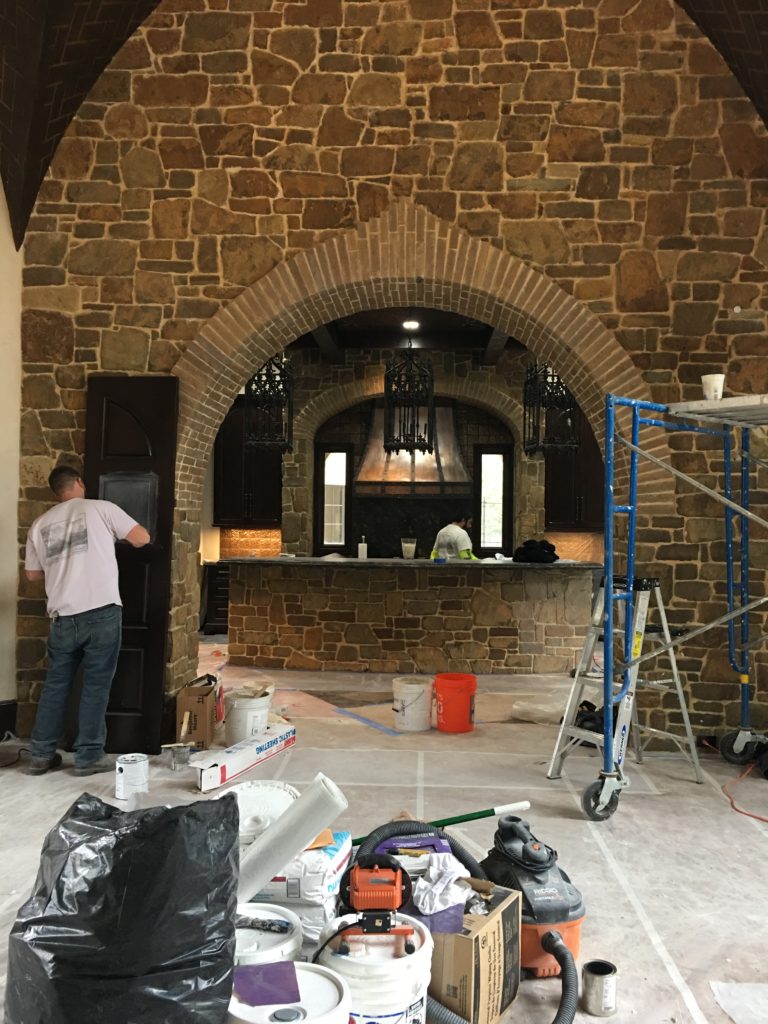 We also decided to lime wash the stone to soften the look and tone all surface colors simplifying the palette.  Are you ready for the change? 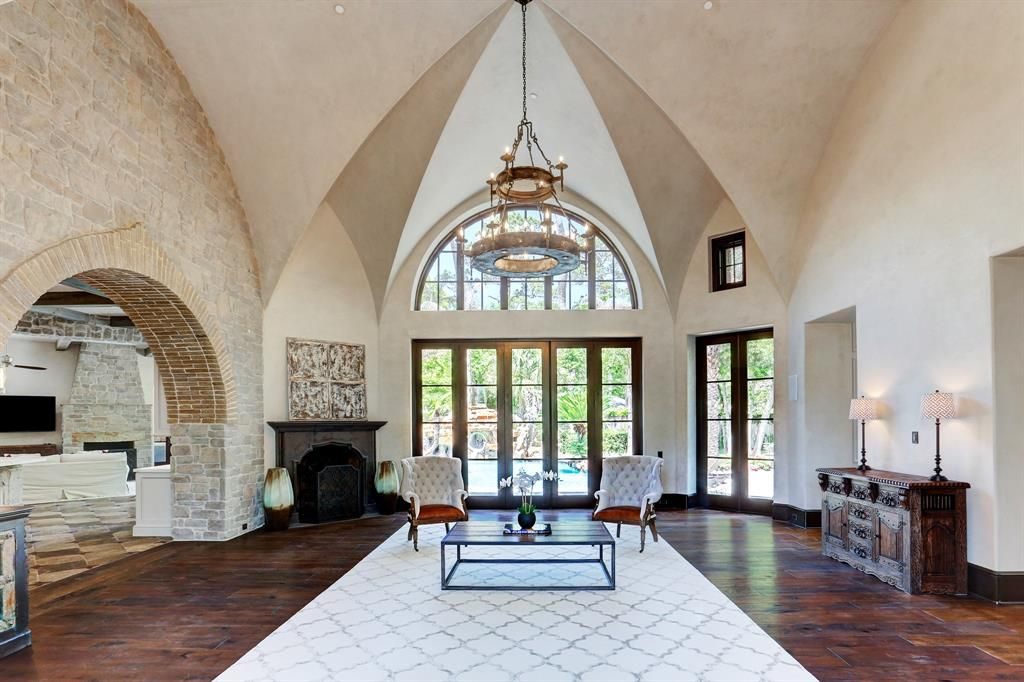 A major transformation and a much lighter, airier look and feel!! It is hard to see here, but the shadow lines of the brick ceiling show though a bit, much like a slurried brick.  It really turned out so beautiful!  If you look to the right you can see they took out the fish tanks and opened up the entrance to the bar and study! 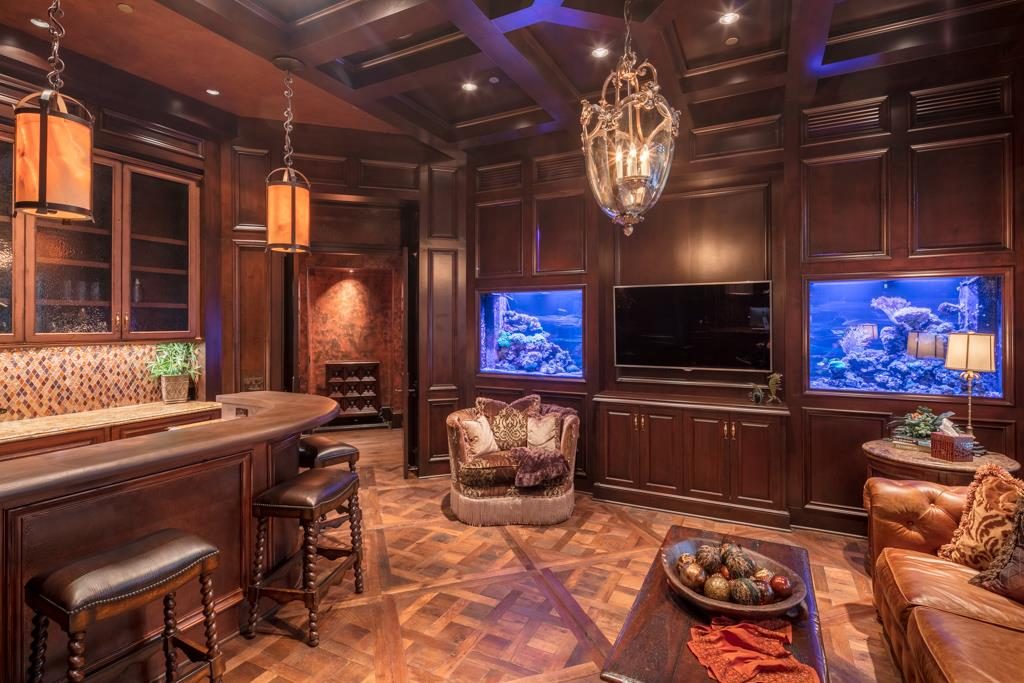 Here is the before of the other side of the living room which is the bar and study.  The two fish tanks became openings to the living room. It was decided to paint the wood to lighten up the look and change the counters and back-splash. If you look through the opening you can sneak a peak of the existing entrance walls. These walls were plastered over is the same tone as the living room area. 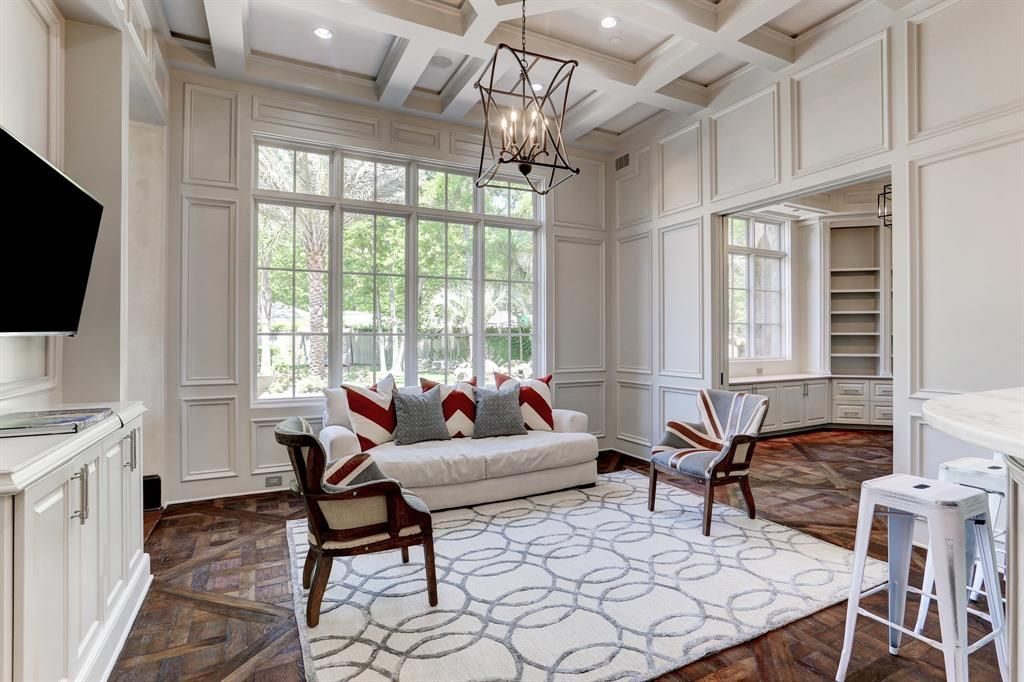 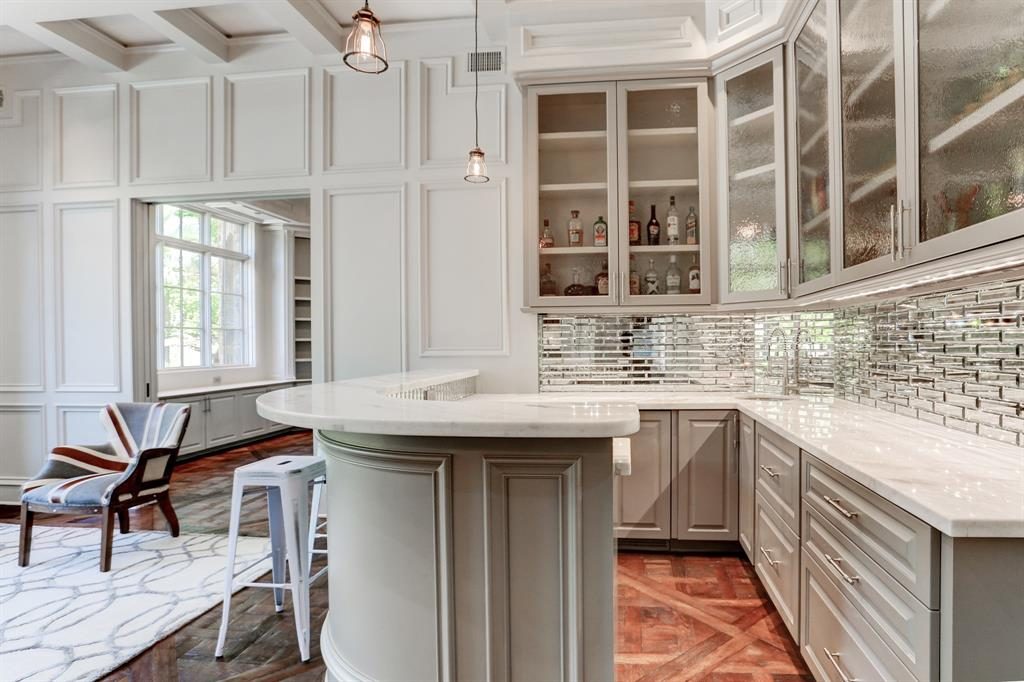 Hardly the same room.  The beautiful detail on the ceiling  and the lovely floors really show now!! 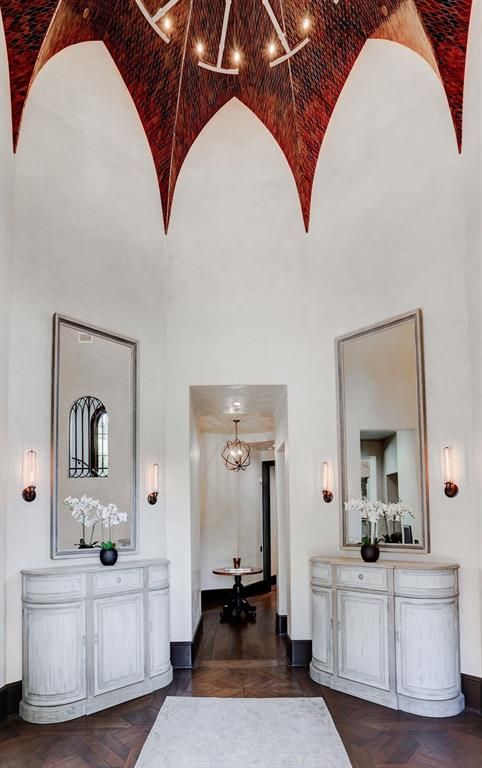 Before we move to the kitchen, I wanted to show you the new entrance! The dark red and copper walls which matched the tile ceiling before, were coated to a light plaster. 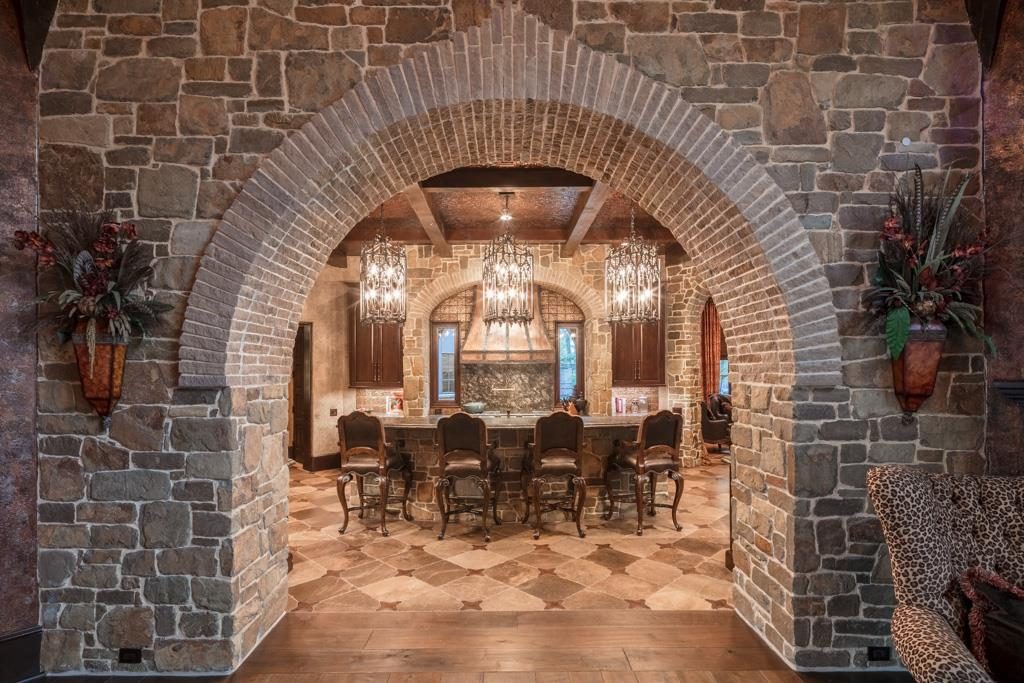 The kitchen den breakfast room were situated on the opposite side of the living area. Before and,……… 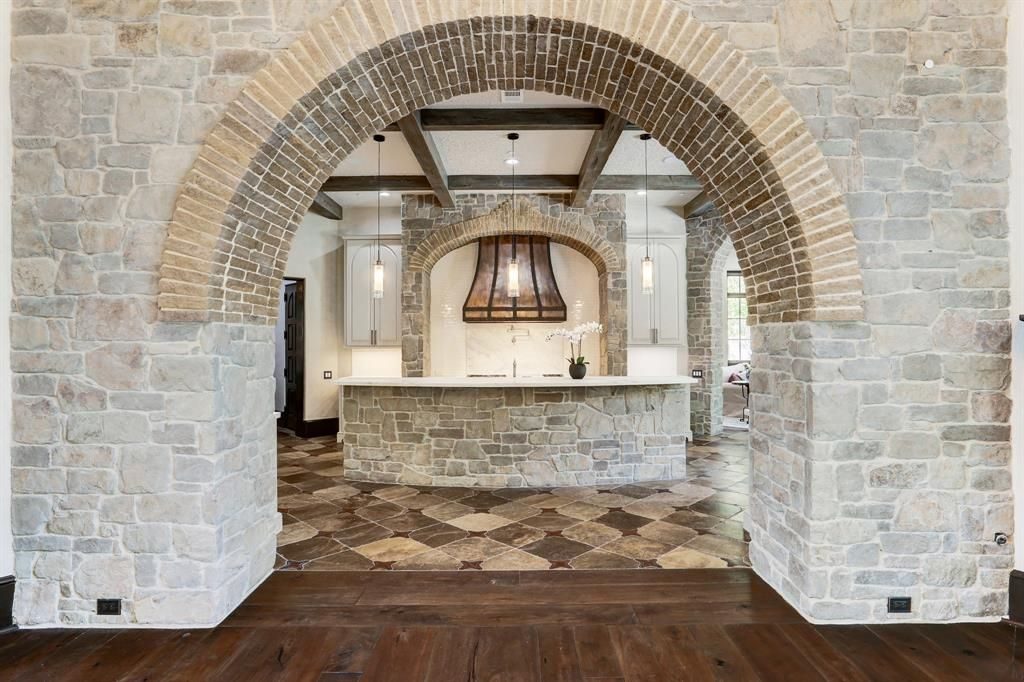 After! Can you count how many surfaces were painted or plastered to simplify the finishes, only allowing certainly elements to become focal. 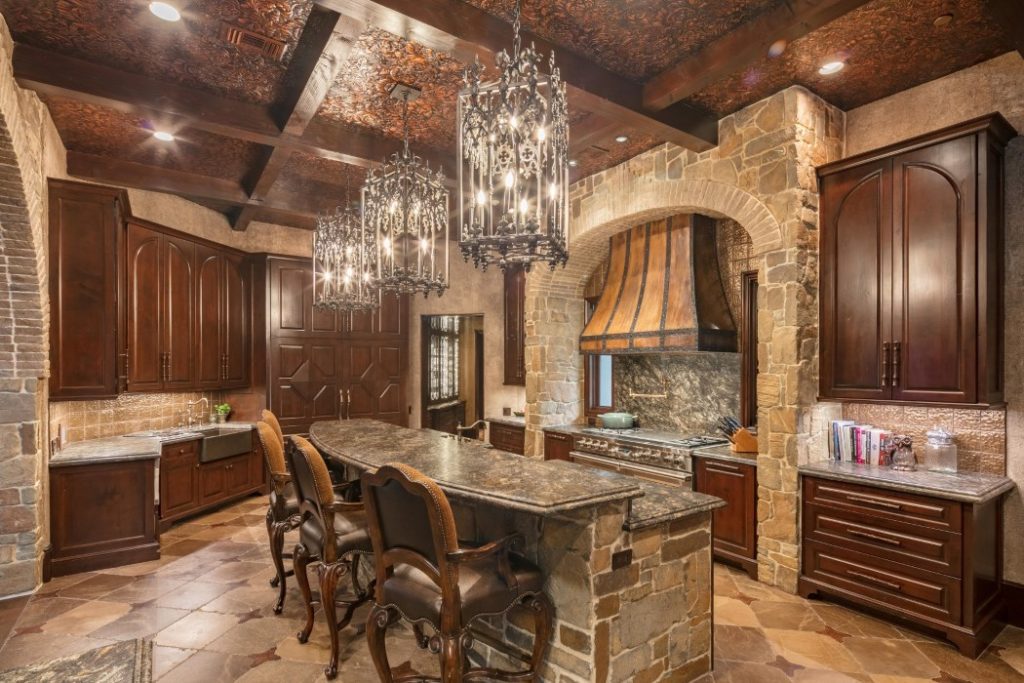 Did you spot them all? 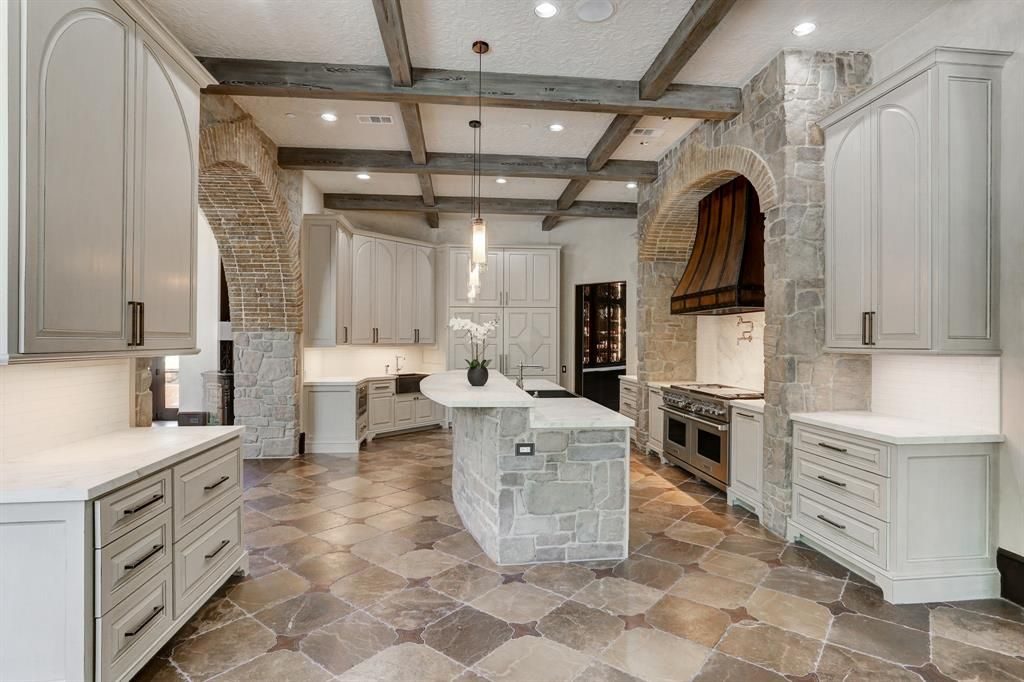 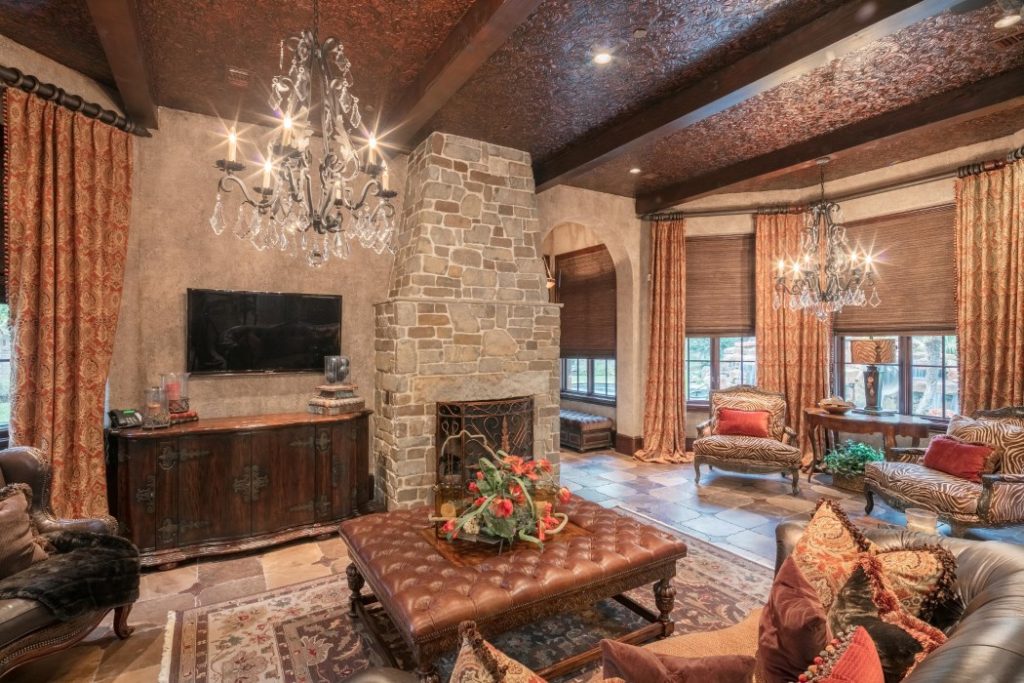 The den off the kitchen received the same transformation. Before and…………. 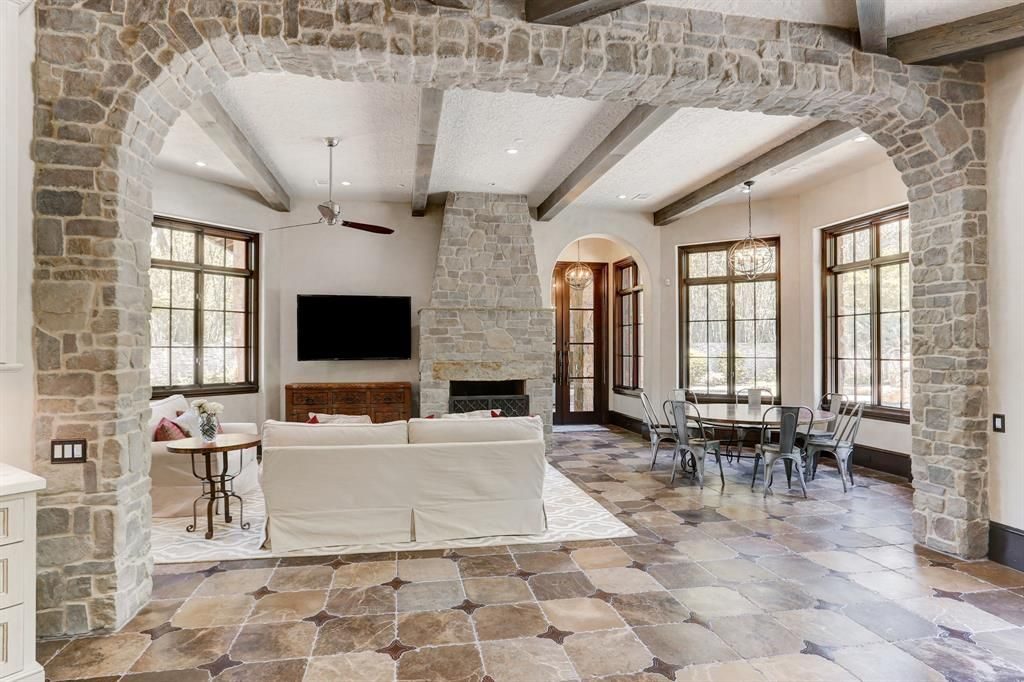 ………..after!  What the picture doesn’t show is that there were two large ornately carved columns diving the space which were removed. 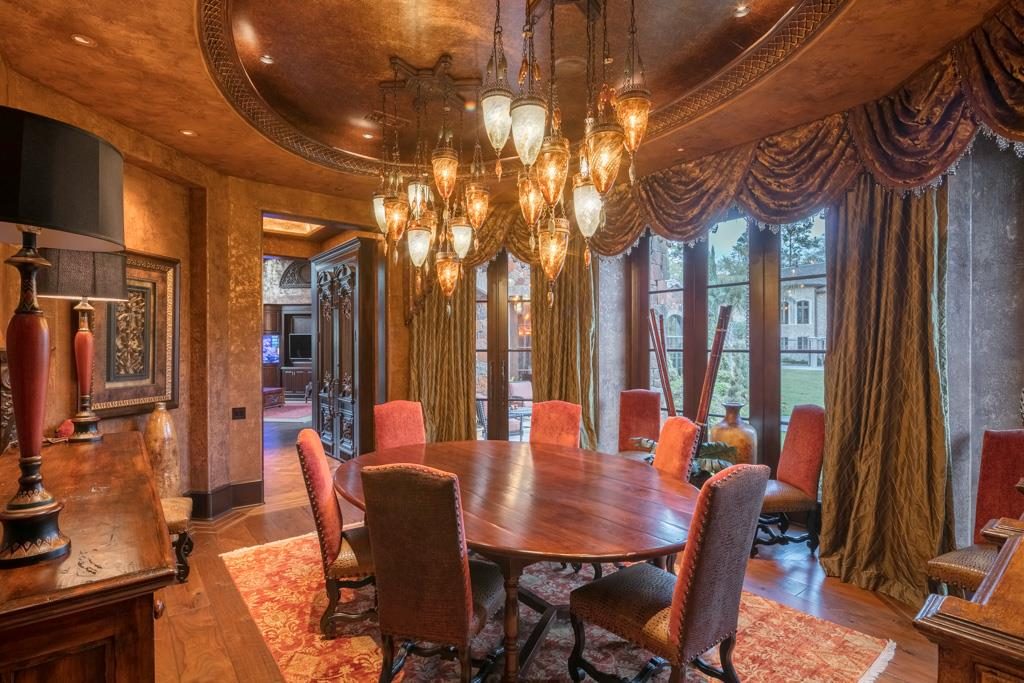 The dining room also takes on a whole new perspective by just changing two things!!  What were they?!!! 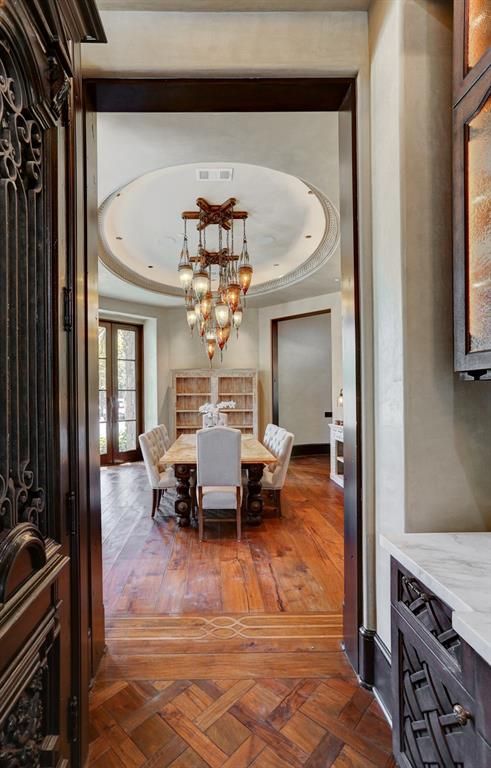 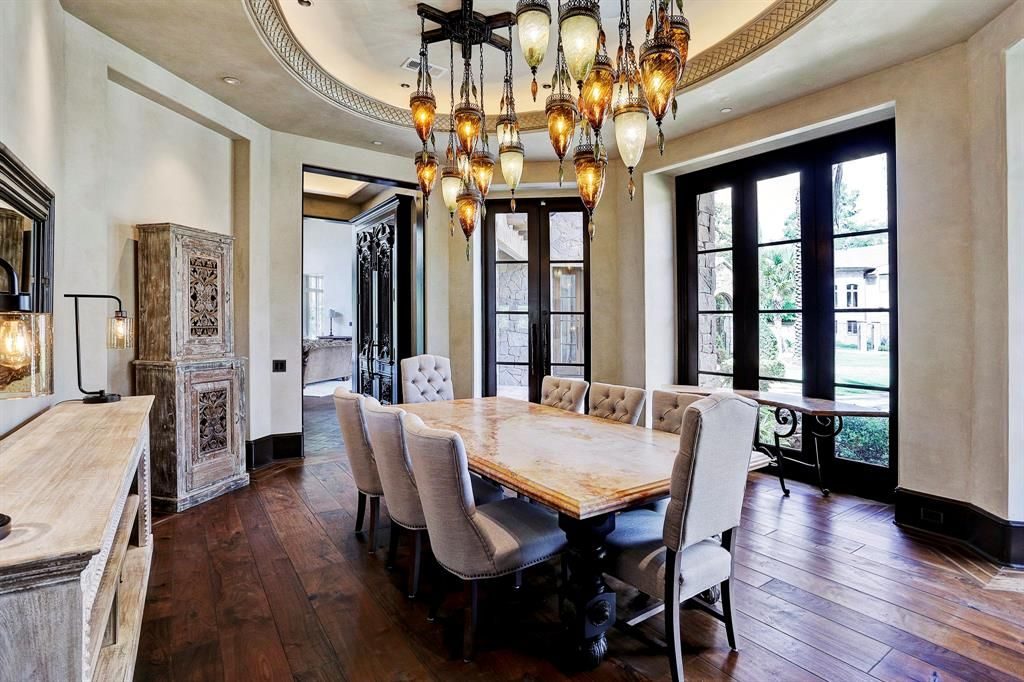 The walls were plastered and the decorative crown was painted in the same tone and then softly highlighted to bring out its carvings. 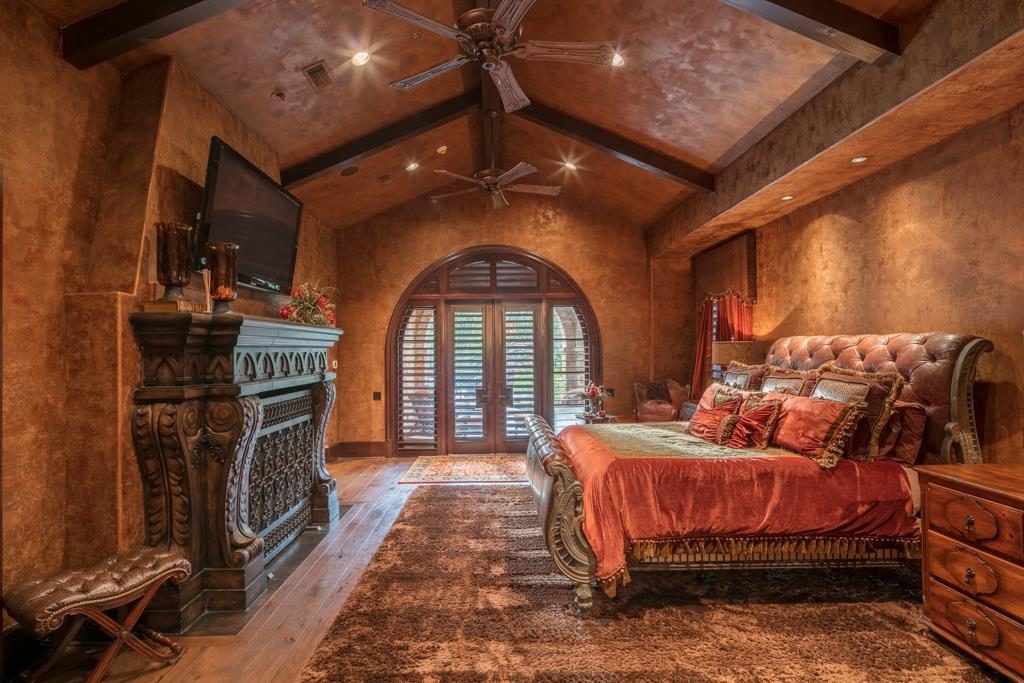 Here is the bedroom before. 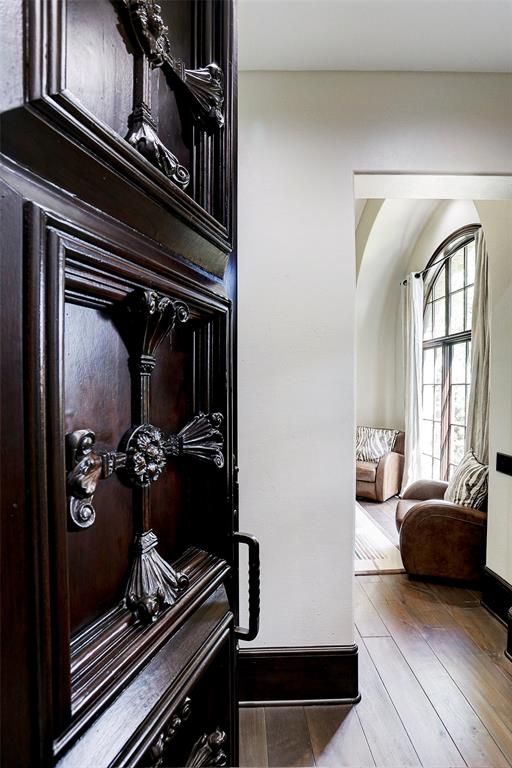 There are some really cool details in the house like these custom hand carved doors!! To lighten the space the homeowners decided to paint the walls in the tone of the plaster and …… 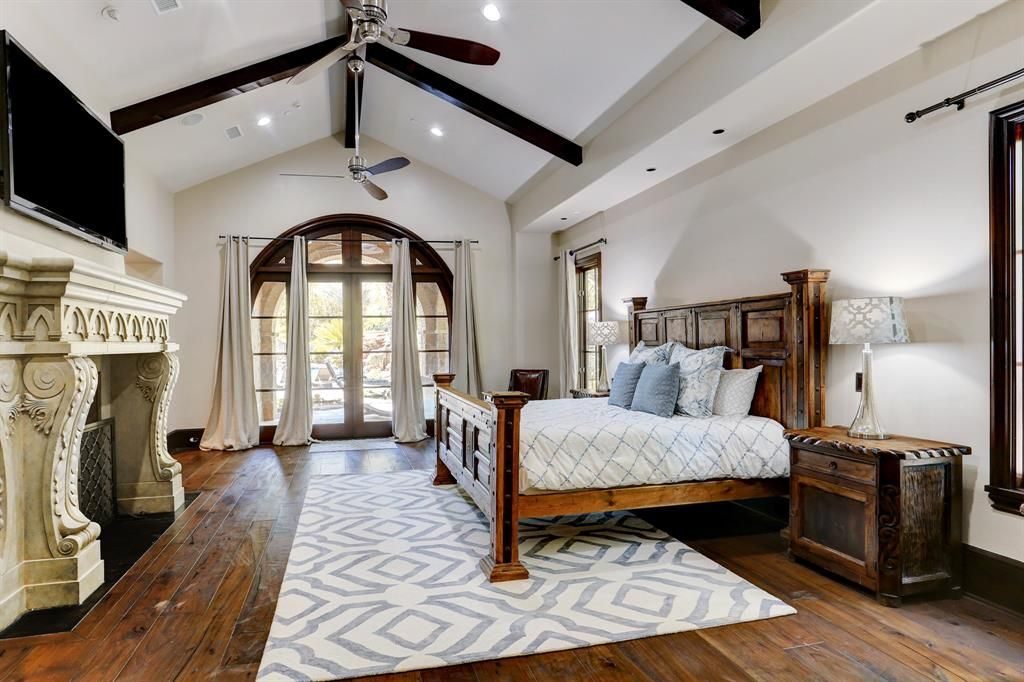 Lighten the fireplace.  It appears a bit golden in the photo but in actuality is a soft warm gray. Not even the same room! 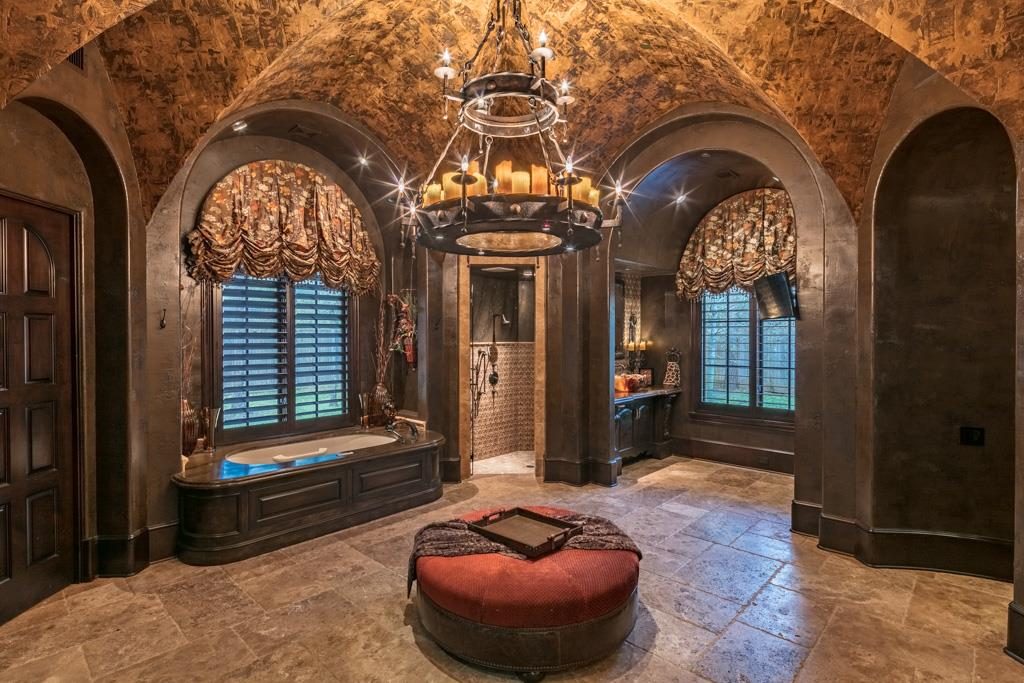 The master bath, very dramatic for sure was also lightened up!!  We liked the pattern on the ceiling–also a raised fauxed design but wanted to soften the finish so the beautiful pattern would show and not the strong variation in color. It much have taken the previous artist a long time to complete this!! 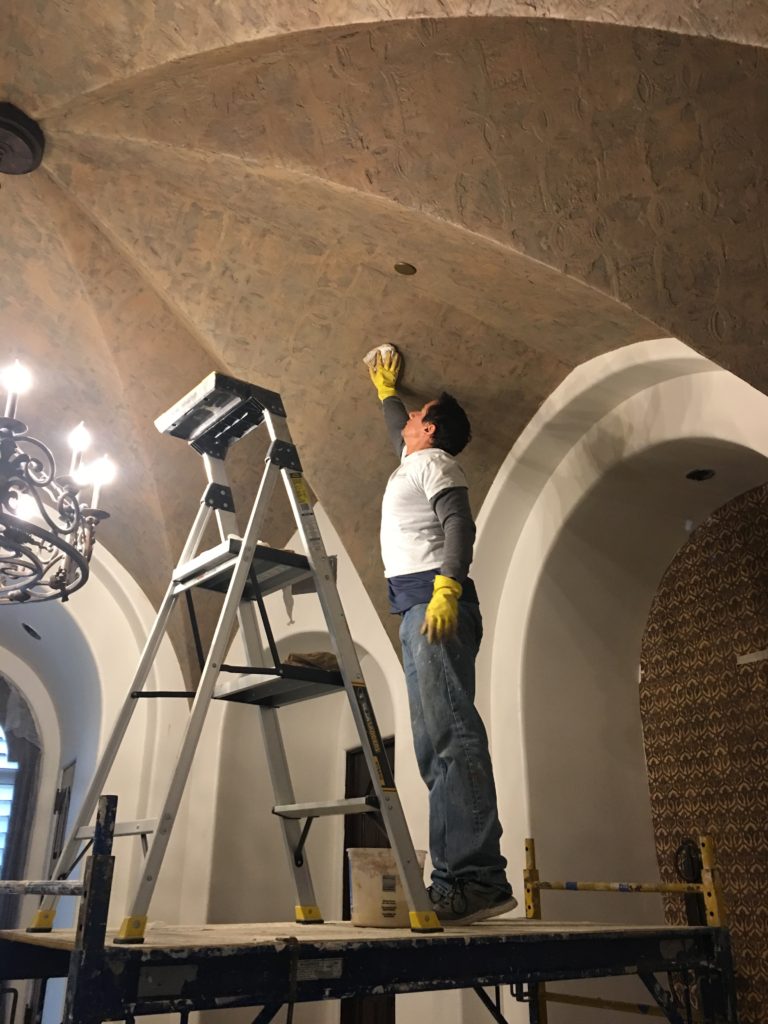 Here is Segreto’s artist putting his second layer over the ceiling!! It was difficult to cover the copper tone so the ceiling did not read pink!! 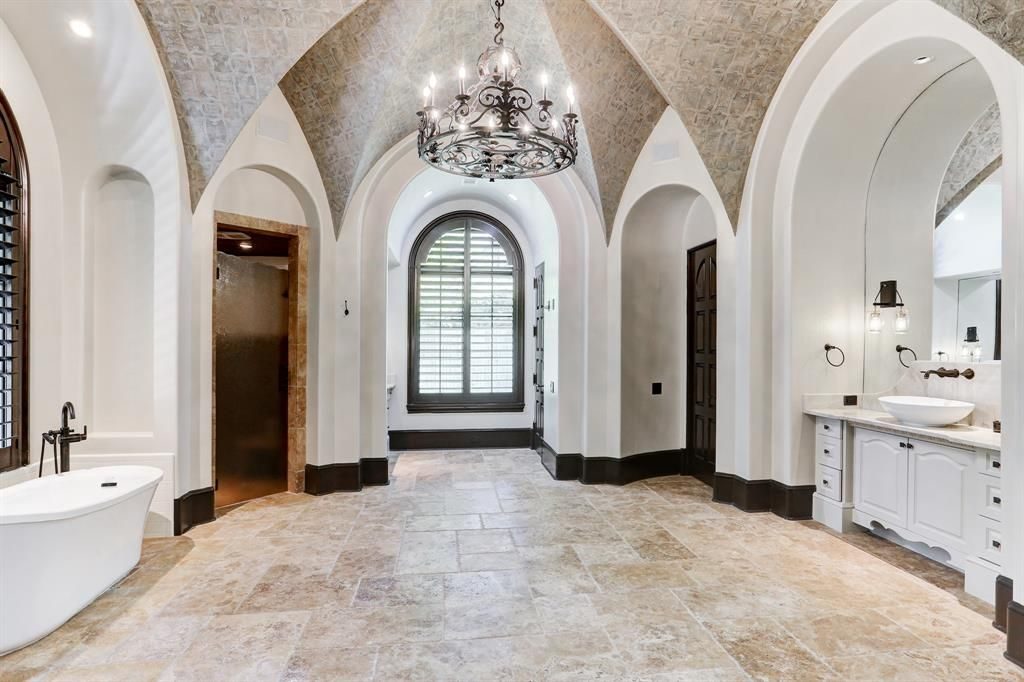 After two more layers, the outcome was beautiful, accentuating the ceiling, one of building designer Robert Dame’s signatures, without lowering the space. On the web if you google Robert Dame on Zillow, 17 came up for sale!! I loved looking at so many of his homes and it was fun to see how many of these same homes that Segreto had done the finishes for! Well I hope you enjoyed this before and after!!  It is amazing to see how finishes can totally change the way a home can look and feel. Next week, we will tour the homes exterior transformation–it’s just as dramatic! Want to move in? Stay tuned next week and I will share who to contact. I hope you all have a truly wonderful week!  Till next time!  xo Leslie